La Croix: Francis’ Church is not clerical, but a Church at the service of the Gospel, but are people picking up the charge to go out and bring about change for the common good? 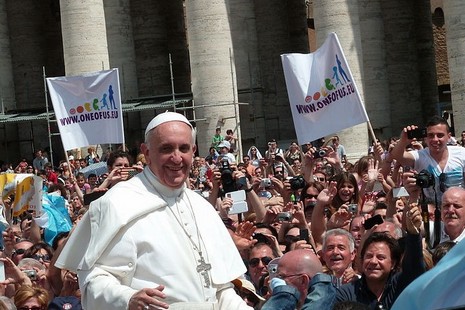 “Hope is like a sail,” Pope Francis said at his Wednesday General Audience this week, referring to the feast of Pentecost. “It gathers the wind of the Spirit and transforms it into a driving force that either pushes the boat out to sea or back to the shore.”

Could this kind of hope enable Pope Francis’ reforms to lead the Church back out to sea? This is the kind of question that keeps recurring in conversation with people in Rome.

The reason is that, while Pope Francis’ reforms are clearly visible, people are wondering how much longer they will last. Or even more directly, they are asking whether the reforms will survive the death of a pope who is already eighty and who has not spared himself physically.

The opposite of a “creative minority”

One person close to the pope uses the image of a ship. The Church is like a bark that is stuck in the sand and cannot move forward, he says. It seems doomed to remain an immovable structure, ensconced in a centuries long tradition, watching powerlessly at Catholics progressively jump ship.

Nevertheless, Pope Francis has succeeded in taking the boat back out to sea. He is the pope who has acknowledged secularization and called on the Church to fully play its role at the heart of a secularized society.

The Church needs to “to go out” of itself, as Pope Francis has repeated in many different ways.

It needs to be outside, with the people, with all people, in contrast to Pope Benedict XVI’s notion of a “creative minority”, formed by an elite who see themselves as being responsible for preserving the Christian message against the odds.

Under Pope Francis, the Church addresses itself to each person with the key words being benevolence and mercy. There are no longer insiders and outsiders. There is no longer a clear-cut program aimed at some sort of restoration, which could be located on a progressive/conservative continuum.

The only program is the Gospel, which can sometimes disconcert people.

As a result, Pope Francis’ Church is the complete opposite of a clerical Church. It is a Church at the service of the Gospel, and not a Church preoccupied solely with its institutional survival.

Finally, Pope Francis’ Church is not a Roman church. He is working to limit the influence of Curia cardinals by calling on grassroots bishops, e.g. the famous C9 cardinals group, to advise him, and by placing greater weight on the notion of synodality.

Knowledgeable Vatican commentators also note quietly that very few documents are now being published by the Roman dicasteries. Take, for example, the activity of the Pontifical Council for the Family.

This body previously issued multiple statements on every conceivable topic with the sole objective of reminding the faithful of prohibitions and warnings.

Who will succeed Pope Francis?

As our Vatican contacts confirm, the vessel of the Church has indeed left the port under the sails of Vatican II with only the Gospel for a guide. “But how long will this last?” they ask with concern.

Certainly a normative constitutional document could institutionalize this re-balancing of power centers. But a pope can do whatever he wants to do. So a new constitution will not prevent a future pope from returning to a more formal Roman system.

In reality, the best way for a pope to continue his work is to make sure that his successor will continue it. Hence the need to prepare the next conclave.

This is the only way to understand Francis’ latest announcement that he will name five new cardinals, a move which took everyone by surprise. He has gone one beyond the current rule of 120 cardinal-electors, i.e. those under the age of eighty.

These five men have wide-ranging personalities, but they all share Pope Francis’ vision of the Church. They are men who are primarily pastors, from countries that are sometimes largely unknown, affected sometimes by very powerful life experiences, including painful ones, and coming from a variety of cultures.

Four years after his election, Pope Francis has already appointed nearly 40% of the electoral body for the future conclave. This is a lot in a very short time.

Another area of support for the pope is his immense popularity. This is evident during his Wednesday audiences.

The pope kisses babies, opens his heart to men and women in a kind of joyful children’s party in which he unsparingly takes the time and trouble to talk and listen to the crowd.

Yet despite his insistence that he is simply a poor sinner, Pope Francis has actually helped create what amounts to a huge “pope-worship” machine, even though he has done so unintentionally.

It is difficult to imagine a successor changing the direction of such a popular pope – at least not openly – without causing a schism in the Catholic Church.

Yet while the people are clearly on the side of the pope, the “managers” are strikingly absent. Among the pope’s entourage, one senses a feeling of disappointment in local bishops, who seem to support the pope in only in word or who just take note of his changes without taking the initiatives that he has called for in many speeches.

As a group, the bishops have effectively snubbed Francis in a kind of cautious waiting game. On the other hand, perhaps his type of Church is too demanding for them.

There is a similar problem with the Catholic lay movements.

As one observer confided, “For nearly fifty years lay people have been complaining about Rome’s authoritarianism, its overly conservative positions, its disconnection from society. Yet now when we are calling them, where are the Catholic Action movements or the battalions of Catholic associations?”

Pope Francis has succeeded in gaining the support of the charismatic movements and other new Church movements. But how many of these have responded to Pope Francis’ call for the Church to go outside of itself?

Who will take the great themes of Pope Francis and pass them on to the grassroots? This is perhaps the principal Achilles heel of this pontificate… Even if there is still reason for hope.