Bishop of Paris criticizes the advent of a society based on idols – a society of money. How do we transmit our value of commitment and solidarity?

This interview will almost certainly be one of the Bishop’s last media appearances before he reaches the retirement age of 75 in November.

The Church “is experiencing a period of rupture between the legacy of a post-Christian society and the advent of a society based on idols – a society of money”.

“The challenge for Christians is to come to grips with whether they will be able to transmit their convictions regarding the existence, the relativity of the economic with respect to the spiritual and the cultural, the value of commitment and solidarity to the coming generation,” he concluded.

By Gauthier Vaillant in La Croix 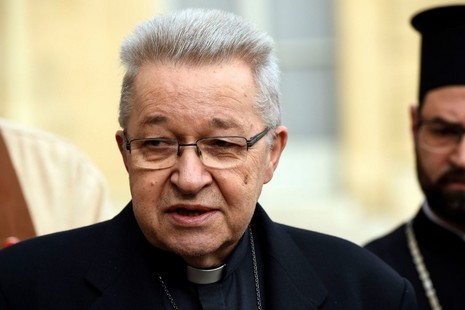 After recovering from Guillain-Barré syndrome, a neurological illness requiring long hospitalization, Cardinal Jean Vingt-Trois of Paris has returned to the public arena following an absence of several months.

Having begun treatment at the end of February, Cardinal Vingt-Trois missed this year’s Easter celebrations, the spring plenary assembly of the French Bishops Conference as well as the debates that punctuated the recent presidential and parliamentary elections.

In an interview with Agence France Press, Cardinal Vingt-Trois described his illness as “a lesson in life” that had enabled him to “modestly share the experience of the sick” and to “experience dependency”.

“This helped me understand that my identity could not be reduced to my activities,” he told AFP in comments that recalled his Easter Week message to the Catholic community.

Media focus “not healthy for democracy”

Regarding the elections, Cardinal Vingt-Trois defended the role of the French Bishops Conference, which was subject to intense criticism after it refused to take a position against Marine Le Pen between the two rounds of the presidential election.

The fact that the media generally focused too exclusively on the role of individuals and not enough on the issues was “not healthy for democracy,” he said.

“I do not remember any election campaign debate where the Church has said that you need to vote for a particular candidate,” he continued, accusing “some people” of looking for “a word that would provide combustible material for a polemic”.

Queried on social issues, particularly medically assisted procreation and surrogacy, Cardinal Vingt-Trois warned against decisions that damage the “common corpus” around which society is organized.

“To give the impression that one can manufacture children based on personal desire and just watch them grow up from afar does not offer a very positive image of intergenerational transmission,” he commented.

He rejected criticism that the Church is over concerned such sensitive issues but too discreet on the issue of welcoming migrants.

In this context, Cardinal Vingt-Trois pointed to the role of parishes and associations, commenting that while their action may not necessarily be “spectacular”, it was more important than “carrying on an inflammatory discussion”.

He also lamented that French society has not given a clearer answer to the question, “do we want to welcome these people or not?”

Finally, responding to a question on the situation in the Diocese of Paris after his twelve years as archbishop, Cardinal Vingt-Trois told AFP that the Church “is experiencing a period of rupture between the legacy of a post-Christian society and the advent of a society based on idols – a society of money”.

“The challenge for Christians is to come to grips with whether they will be able to transmit their convictions regarding the existence, the relativity of the economic with respect to the spiritual and the cultural, the value of commitment and solidarity to the coming generation,” he concluded.