Today there are announcements of concrete action to move to the fossil free and more life-giving society, economy, and environment of the future!  There is news of the first bishops conference to divest (that one of Belgium), the first Catholic bank to divest (from Germany) and the fact that the major institutions of Assisi (the diocese, the Sacro Convento which houses the bones of St. Francis, and even the town municipality) decided to divest together.  See news coverage or the press release available at this link, with quotes from divesting institutions, infographics, social media graphics and other useful resources.

Thank you to Patrick Carolan, Exec. Director of the Franciscan Action Network and on our GCCM Steering Committee, for the reflection below, on Building Heaven on Earth, also on Patheos.  He reminds us: If we are going to create this Heaven on Earth with God, we first have to imagine it. Then every moment of everyday, our every action and thought should be centered on building the kingdom of God on Earth. 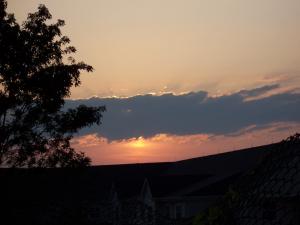 I am an early riser. I like to get up before the sun, make some coffee and sit on my porch. I listen to the morning symphonies of the birds, watch the sun rise. The beautiful painting that the sun creates against the sky combined with the melodies sung by the birds is truly awesome and each day is an entirely new experience. Many mornings I sit and reflect on heaven. Our Christian theology is based on dying and going to heaven. We really have no idea if heaven is a place and what it is like. We believe we will be happy and at peace. We often view Heaven more as what it is not. It is not hell. We kind of have a better picture of Hell than we do of Heaven. We used to believe that heaven was in the sky and hell was down below. Hell was thought of as a place where people who weren’t good suffered in the eternal fire of damnation. We now know that Heaven is not some place up in the sky and hell is not some fiery torture chamber down there, (wherever that is). I remember as a kid being motivated to be good not by the joy of heaven, but by the fear of hell.In my travels I often ask people what they think Heaven is like. The responses are as varied as the sunrises I watch each morning. I remember one preacher telling me that heaven would be like a giant continuous prayer service where we all will be bowing and worshiping God all the time. I have to admit that when I think about that response, it seems wrong on so many levels. First off, what type of being would be so ego- driven that he or she would want us to spend all of our time bowing and worshiping them? It almost seems a more appropriate description for an ego- driven satan and hell than a loving God and heaven. I have read the Bible from cover to cover, read many theologians’ interpretations, talked with priests, bishops and everyday people about their view of Heaven. People have even written books about whether your pet will be in Heaven with you. Their views and interpretations are all very different, but the one consistency seems to be is that heaven is ‘somewhere else.’ It is a place to go to.

In Matthew 3:2 Jesus says “Repent; the kingdom of heaven is at hand.” Jesus was on Earth when he said that. He was not “somewhere else.” Our theology teaches us that, assuming we do everything that we are supposed to do, we will see Jesus somewhere else. Yet in Hebrews 13:5 “for he has said, ‘I will never leave you nor forsake you.” In Matthew 28:20 it says: “And behold, I am with you always, to the end of the age.” So if Jesus never left us and the Kingdom is at hand does that give us a slight hint about where Heaven is?

A few weeks ago I couldn’t sleep so I turned on the TV. A movie starring Ben Affleck and Elle Fanning came on, Live by Night. It was not a very good movie but there was one scene that stuck in my mind. It was set in the 1920’s in Tampa, Florida. Affleck played a Mafia boss involved in rum running during prohibition. Fanning played a young woman who left Florida to go to Hollywood and become an actress. She ended up a prostitute and heroin addict. She managed to get clean and came back to Tampa where she found God. She started preaching against the evils of gambling and alcohol. There is a scene where she and Affleck are sitting in a coffee shop talking. The subject of Heaven comes up. Affleck says he will never get to heaven. Fanning’s response is that maybe we are in Heaven. Affleck responds asking how could we be in Heaven when there is so much pain and suffering. Fanning’s reply is what really stuck with me: “Maybe this is Heaven but we just f—ed it up.”

I have sat and thought about this for awhile. I know it is a silly line from a B-rated movie. But what if this is Heaven and we really have messed up? Our early creation story in Genesis talks about the Garden of Eden. Describing it as paradise. This concept of a paradise or a Heaven on Earth is not limited to our Christian tradition. Most ancient cultures had stories about a paradise and how, because of some action our ancestors did, we were expelled. The Sumerians called it Dilmun. The Greeks identified it as the Garden of the Hesperides. In ancient Hindu mythology, Nandankanan is a garden of the deities. According to our ancient mythology and sacred stories there was a Heaven on Earth and we messed it up. So, Fanning’s comment could be somewhat accurate. Does it actually make any difference? Should we be spending our time debating the finer points of where Heaven is and how we get there? Maybe our purpose on Earth is not to go somewhere else but with God, create Heaven here on Earth.Just imagine for a few moments what this Heaven would be like. How would we even begin? Well if we were going to build a house we wouldn’t just start hammering pieces of wood together. We would first think about how we want our house to look. We would draw up a design. We would carefully figure what materials we needed so as not to waste anything. We would look at other houses to get ideas. What do we think this Heaven here on Earth should look like? In The Lord’s Prayer, which is the prayer that as Christians we pray the most, it says: “Thy Kingdom come, thy will be done, on Earth as it is in Heaven.” Do we believe that in “Heaven” some children will be starving while some of us throw away millions of pounds of food everyday? Do we believe that some will be living in garbage dumps while others live in mansions? Do we think that woman will be sold into sexual slavery or children will be forced into slave labor, so others can have cheaper products? Do we believe there will be a United States and a Mexico separated by a wall in heaven? Do we think people will be carrying guns and using them to massacre folks in heaven? Do we think there will be very wealthy and very poor in Heaven?  Do we honestly believe there will be constant war in Heaven or everlasting peace?

If we are going to create this Heaven on Earth with God, we first have to imagine it. Then every moment of everyday, our every action and thought should be centered on building the kingdom of God on Earth. Some might argue that I am wrong, that I am a heretic for suggesting that Heaven is here on Earth. Suppose that we all came together, stopped thinking about going somewhere else, worked to build God’s kingdom on Earth and it turned out we were wrong and there is a Heaven out there somewhere. Do we think God will say to us, “How dare you waste your time trying to build the kingdom on Earth instead of making sure your bags are all packed and you have the right ticket to come here.”