Cardinal: No religion is completely innocent from abetting violence. In many cases, it is used as a “pious framework” for other tangible vested interests. 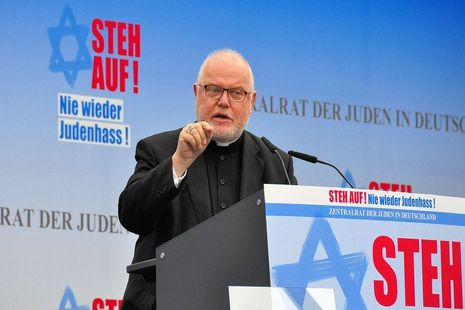 Cardinal Reinhard Marx of Munich (Germany) has called on all religions to do some serious soul-searching over their possible complicity in creating violence in the world, saying no faith community could be automatically exempt.

“We must be quite clear about this! Religions simply must ask themselves – and permit themselves to be asked – whether by the way they are being interpreted or lived, they are contributing towards justifying or even fueling conflicts, or whether they are promoting peace and reconciliation between culturally different nations and groups,” he said in a June 2nd interview with the Luxemburger Wort.

Marx is one of Pope Francis’ nine cardinal advisors (C9) and coordinator of the Vatican’s finance council. According to him, this issue is especially important because of the strong influence religion has on forming the characters and psychological development of young people.

He said all religions must ask whether they are using this influence to radicalize their youth or to teaching how to maintain balance and harmony; whether their theology is principally and unequivocally critical of violence; and whether their members who legitimize violence are being corrected.

Cardinal Marx, 63, said religion is rarely the main reason for conflicts today. But he noted that in many cases it is used as a “pious framework” for other tangible vested interests. Because of this, he said, religion cannot be altogether acquitted.

He stated clearly that the term “religion” cannot completely describe what is actually being lived, however, and insisted that not all religions are the same. That’s why dialogue is so important, he said.  Although Christ and the Bible message aimed at overcoming violence, the Church – “as we know” – has not always lived up to this criterion, the cardinal admitted. He added that the Church has had to learn that tolerance does not mean the same as relativism. And it has had to learn to proclaim the truth of the Christian faith without using force.

Marx said the violent conflict currently raging in Syria is difficult because diverse national, regional and world-political interests are interwoven. Although religion is “almost omnipresent”, it is not always about revering God. Rather, it serves as a defining feature for hostile groups.

The cardinal said he was convinced that self-criticism within the individual religious traditions, as well as encounters between different religions, could have a positive influence on the role religions play in the Syrian conflict.

He stressed that the situation of Christians in the whole of the Middle East is most worrying, lamenting that one could not rule out a general exodus of those Christians left in the Middle East after being deliberately persecuted, murdered and driven out in recent years.

“That would be a veritable catastrophe not only for Christianity, which has its roots in the Middle East, but also for the majority of Muslim countries who have for centuries profited from the peaceful co-existence of both faiths,” Cardinal Marx said.