Catholic NY: “I saw the light” – Catholics and other green allies in New York demonstrate for fossil fuel accountability

After much effort and pushing by Catholic Mark Dunlea and colleagues in New York, the state Assembly considered a budget resolution with a call to “create the necessary infrastructure to help move New York closer toward the statewide goal of 100 percent renewable energy use by 2030” and allocate $32 million to assist with that effort.   It did not make it into the final budget but the proposal did receiving strong support from Assembly environmental chair Steven Engelbright as well as other Assemblymembers such as William Colton and Barbara Lifton. The Governor could still fund it.  Dunlea leads 350 NY and the 100% Renewables Now campaign.  See Green 100% Energy by 2030 for more information.

Dunlea and other climate activists also held an April Fuels Day mock Exxon news conference to highlight the need for the company and its executives to be held accountable for allegedly lying about climate change. 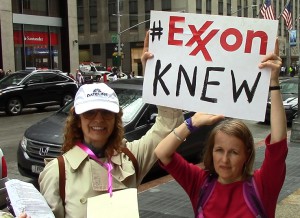 In the mock news conference, Exxon-Mobil CEO Rex Tillerson claimed the company had “seen the light” — especially following this week’s announcement by more than a dozen state Attorneys General that they were creating a coalition to take action on climate change. Massachusetts and the U.S. Virgin Islands joined New York and California in investigating Exxon. A number of elected officials are demanding that the federal Department of Justice join the investigation of what may prove to be one of the biggest corporate scandals in American history.

“Exxon lied, so people died. Their greed for massive profits overrode the truth: they knew that continuing to burn fossil fuels would result in catastrophic climate change. The amount of human suffering will get far worse as extreme weather becomes ever more frequent. The people who run ExxonMobil need to put in jail for crimes against humanity, and the company needs to pay for the damages they caused,” said Dee Ahearne of 350NYC.

350NYC also called for State Comptroller Tom DiNapoli and City Comptroller Scott Stringer to support divesting the state and city pension funds from fossil fuels, starting with Exxon. The city and state have about $2 billion invested in Exxon.

350NYC said that, as part of a “Coming Clean” campaign, Exxon should agree to: keep 80% of its existing fossil fuel reserves in the ground; immediately halt any investment in finding new fossil fuels (e.g., $23.2 billion in 2016, $34B in 2015) and instead fund the transition to clean, renewable energy (not natural gas); and provide billions in compensation to help countries deal with the damage caused by climate change, especially front line communities in developing countries. They should also fund a campaign to convince Congress to enact a robust national carbon tax (e.g., at least $100 per ton) after years of claiming they support such a tax. 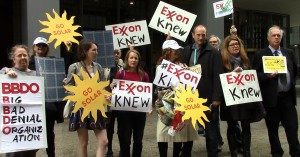 Last year, Inside Climate News and The Los Angeles Times each published stories showing that that Exxon knew about the threat of climate change decades ago. Yet over the course of nearly forty years, the company has contributed millions of dollars to think-tanks and politicians who have done their best to spread doubt and misinformation — first on the existence of climate change, then the extent of the problem, and now its cause. If Exxon intentionally misled the public about climate change and fossil fuels, then Exxon must be held accountable – both civilly and criminally.

Senior company scientist James Black told Exxon’s management committee in 1977: “In the first place, there is general scientific agreement that the most likely manner in which mankind is influencing the global climate is through carbon dioxide release from the burning of fossil fuels.” By 1982, in an internal “corporate primer,” Exxon’s leaders were told that, despite lingering unknowns, dealing with climate change “would require major reductions in fossil fuel combustion.” Unless that happened, “there are some potentially catastrophic events that must be considered … Once the effects are measurable, they might not be reversible.” But that document, “given wide circulation” within Exxon, was also stamped “Not to be distributed externally.”

The news conference concluded with Exxon executives announcing that the company had adopted a new version of the Hank Williams tune, “I Saw the Light” as the theme song for the company’s commercials (see lyrics below).

I SAW THE LIGHT

We plundered the earth and we burned all the oil . We turned up the heat so the seas soon will boil We burned too much gas and we weren’t too bright But bring on renewables, I saw the light

We drilled and we fracked, now the water’s on fire.  We knew we were wrong and we played the liar But now so the New York AG won’t indict,  Bring on renewables, I saw the light

We burned up the planet, we kept prices high . We raked money in, and we dirtied the sky The waters are rising and millions may die So bring on renewables, I saw the light  CHORUS

We bought up the Congress, they do what we say They’re all in our pocket, so we get our way,  But people are rising, they’re starting to fight So bring on renewables, I saw the light.

The action doesn’t stop.  Next steps in the New York region are as follows.  Please join if you are in the area!

SAPE (Stop the Algonquin Pipeline Expansion) is teaming up with Food and Water Watch to conduct a Rally – Protecting Natural Resources, Health and Safety in the Hudson Valley And Beyond on Sunday, April 3, 2016 at Riverfront Green in Peekskill, New York. Our goals are: 1) to stop the extremely dangerous Algonquin Incremental Market (AIM) Pipeline from going forward and 2) to project a message that new or expanded gas pipelines here or elsewhere are not a viable energy solution and should also be stopped, because they pollute natural resources, hurt health and safety for people, wildlife and domestic animals, and contribute significantly to climate change

April 5 – Rally against FERC and Constitution Pipeline at State Capitol

FERC (Federal Energy and Regulatory Commission) has approved lots of fossil-fuel projects in NY and wants to rubberstamp more. The NYS Department of Environmental Conservation (DEC) has the power to stop one of these projects right now: the “Constitution” pipeline. But ONLY if it denies the project’s water quality certificate by the end of April. Governor Cuomo needs to stop the invasion of these ruinous pipelines, compressor stations, and gas-fired power plants in our communities. Come to Albany and tell the governor to stand up to FERC, protect NY water and deny the 401 water quality certificate for the Constitution Pipeline! The rally and march start at 11:30 AM at East Capitol Park in Albany on April 5.

Panel Discussion on Climate Change. Speakers will include Dr. Susan Spencer, founder of ROCSPOT, a group dedicated to transforming the Rochester economy from one based on fossil fuels to one powered by solar technology; Mark Dunlea of the Green Education and Legal Fund, which is dedicated to full employment and lower energy rates by transitioning to clean, renewable energy by 2030; and Vanessa Rule, founder of Mothers Out Front, a group also fighting for a complete transition away from fossil fuels– for the good of the planet and our children and grandchildren. Sponsored by National Council of Jewish Women (NCJW)

The campaign to bring offshore wind power to New York is picking up speed and the wind is at our backs! In February, more than 150 of us came out to the steps of City Hall to call on Mayor Bill de Blasio to make offshore wind a key part of his climate agenda. The very next day, on WNYC radio, the Mayor spoke about the importance of developing offshore wind for the Big Apple.  Now it’s time to build on our momentum and keep him accountable.

On April 9th, the media will be hosting their annual Inner Circle Show, where de Blasio and the press trade spoofs in song and dance. This year’s theme is “Shamilton”. We’ll be putting on a show of our own outside, sporting Hamilton costumes and holding wind turbines, maybe even breakin out some Dylan (“the answer my friends, is blowin in the wind…”) We need you there with us to ensure the Mayor and the media know that New Yorkers are looking for an ambitious offshore wind commitment from the City on Earth Day.

Come out and bring friends—it’s time for a renewable energy revolution in New York. It’s time to #WinWind for NY!

(From 350.org) Every country in the world has now agreed to tackle the issue of climate change, historically low prices have sent the industry into a financial tailspin, and two consecutive years of record global temperatures have galvanized support for climate action. There has never been a better moment to confront the fossil fuel industry and break its hold on our economy. (See video)

This May, organizers on every continent are planning a global wave of mass actions to leverage this moment — to break free from fossil fuels and spark a just transition to 100% renewable energy.

Along with partners around the world, we announced the Break Free 2016 mobilization as the Paris Climate Summit was wrapping up in December. You signed up to get more info, and today I’m proud to share the results of lots of hard work and planning: if you go to breakfree2016.org now, you can see all the details for many of the bold actions being planned around the world.

In the United States, the Break Free mobilization will be a series of actions from coast to coast to take on the industry and keep fossil fuels in the ground. Click here to find an action near you this May.

Break Free isn’t like anything we’ve ever done before. It’s a network of independently-organized actions to keep fossil fuels in the ground. It’s escalated, but more than just a handful of protest veterans. It’s a mass mobilization, but not just happening in one place at one time. It’s global, but grassroots-driven.

In Albany, New York, a coalition of groups from across the region will take on an oil-by-rail terminal that pumps pollution into the homes of the city’s poorest residents; in Colorado, activists will take a stand to say that it’s time to keep all publicly-owned oil and gas underground; in Los Angeles, community members will call for a fracking ban — and so much more.

The nation’s spotlight will shine on Philadelphia during the Democratic National Convention in July 2016. Now more than ever, it is imperative that our political leaders take swift action to keep the vast majority of fossil fuels in the ground including oil and gas from fracking and other extreme extraction methods. They must commit to swiftly attaining a full and just transition to renewable energy.