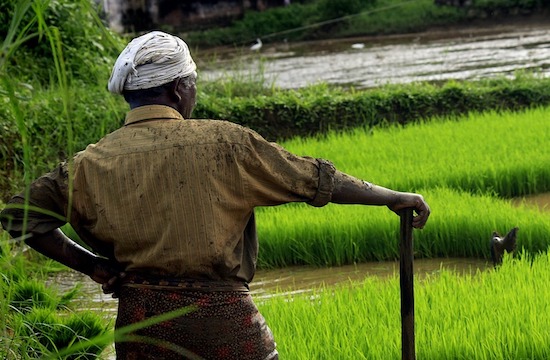 A farmer in Kerala, India. (Photo from Pixabay)

It was mid-April when Ishwar Ram decided to end his life. He swallowed rat poison in an attempt to get his debt-stricken family out of their crisis once and for all.

But his family hospitalized the Uttar Pradesh farmer, and he survived. Now Ram, 34, struggles to pay off a bank loan of 160,000 rupees (US$2,300) he took to purchase quality seeds and pesticides.

Ram, a father of five (the eldest being 12 years old), had failed to pay a single instalment on his bank loan. Bad weather and unseasonal rains had put this already anxious farmer in dire straits. To make matters worse, a new breed of insect and other pests had eaten away at his harvest.

“In February last year, I was hoping for profitable produce. I was growing maize but rains dashed all hopes,” Ram told ucanews.com.

“When the rains stopped, all I saw was my crops being destroyed by pests.”

It still agonizes him to recall his near-fatal decision.

“[The] bank was about to confiscate my land and my house. Therefore, I decided to end my life to end all the hardship that my family was set to bear,” he said. “I mixed up rodenticides with my food. I ate that and slept.”

His relatives living in Delhi loaned money to the family to pay off the debt. But for Ram, things didn’t become any better. Bad weather persists, forcing his family to go without food even now.

The effects of climate change and unseasonal rains have been wreaking havoc on economically poor communities in India, says Purshutam Das, a social worker among farmers in New Delhi.

“The crop yields have turned monstrous for the farmers across the country and they aren’t able to even feed their families because their crops are every year getting destroyed due to bad weather,” Das said.

A recent report found that 2,736 people in India, out of a total of 11,500 people worldwide, died in extreme weather events such as floods, heat waves and cyclones in 2017.

The report, from Berlin-based environmental organization Germanwatch, said the number of Indian fatalities were second only to those in Puerto Rico, which recorded 2,978 deaths from extreme weather. Due to its high population and other factors, India ranked 14th on the Climate Risk Index.

It said 73,000 people died in India due to extreme weather conditions from 1998 to 2017, reflecting how prone the country is to natural calamities.

Hari Das, who heads the climate change department at Caritas India, said that his organization is focusing on the country’s farming sector, which covers some 70 percent of India’s 1.2 billion people.

He said farmers are the worst hit by changing weather patterns as they depend on seasonal rains for farming. The charity is training farmers in soil fertility, water conservation and climate resilience systems.

“Caritas is covering most Indian states and is primarily focusing in the northeastern region,” said Das. “Organic farming could provide a bulwark against the swirling tides of climate change in the country.”

As the country is hit by disasters such as cyclones and floods, the church agency is rigorously working to help farmers adapt to the situation.

Experts like him say an abrupt increase in temperatures and unseasonal rains is becoming the new norm in India, leading its farming sector into chaos.

In May 2016, the temperature in Rajasthan state touched 51 degrees Celsius, breaking previous records. An estimated 1,000 people died in the northern state due to dehydration and hyperthermia. That year, heat waves killed 800 people across the country.

According to government data, the persistent drought and a surge in temperatures affected more than 330 million people in 2016.

That same year, Cyclone Vardah, one of the deadliest cyclones ever in the Indian Ocean, made landfall in Chennai.

According to a 2018 Lancet report on health and climate released last month, India witnessed the output of its workforce decline by 7 percent — equivalent to the loss of 75 billion man hours — due to heat-wave conditions

The report wanted the Indian government to identify “heat hotspots” and promote the timely development and implementation of local heat action plans to protect the most vulnerable groups.

Millions have felt the impact of crops destroyed by drought or washed away in monsoon rains.

One of them, Mohammad Subhan, a farmer based in Bihar, plans to quit farming and train instead as a painter to support himself and his family.

Last year, when he was planning to sow crops on his two acres of land, the drought didn’t even allow the seeds to sprout.

“There wasn’t any water to irrigate the field and I couldn’t see any harvest of all the hard work and money I put into my land,” he said.