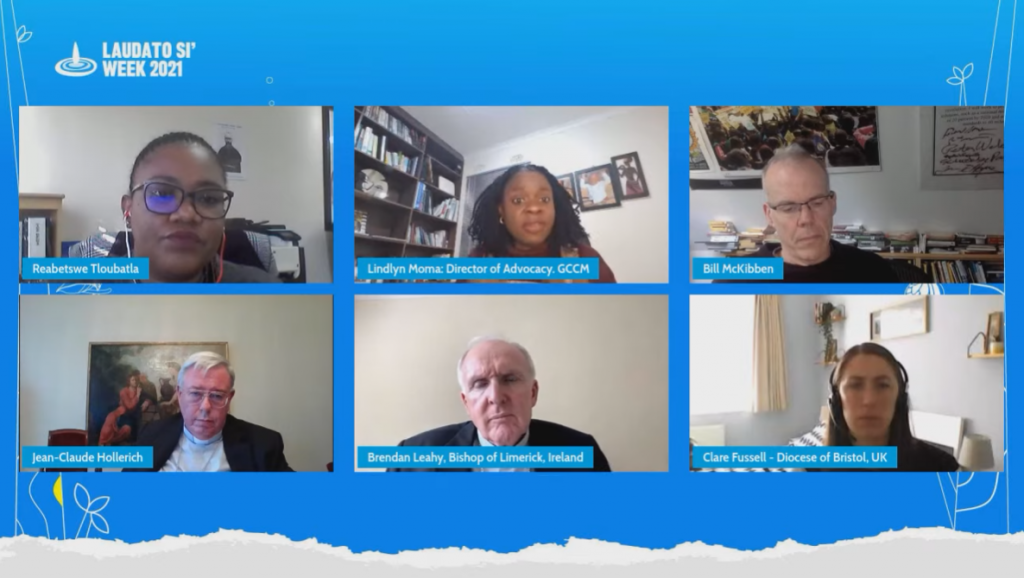 Laudato Si’ Week 2021 continued on Wednesday with an inspiring dialogue on divestment, energy, and fossil fuels, and how Catholics around the world can lead the divestment movement.

Rev. Joshtrom Isaac Kureethadam, Head of the Vatican’s Ecology and Creation Office, started the dialogue with a moving video that reminded observers of the Vatican’s call for all Catholic institutions to divest from fossil fuels.

“Let us be courageous, let us divest,” he said. “Let us listen to Pope Francis’ invitation to divest from fossil fuels and protect our common home.“

Bill McKibben, New York Times best-selling author and co-founder of 350.org, framed the conversation in the urgent terms that surround the ecological crisis and climate emergency.

“Climate change is the first time-limited test that human beings have really ever faced, where if we don’t win very soon, we won’t win at all. Because no one has a plan on how you refreeze the Arctic once it’s melted,” he said. “We have to move at very high speed.”

In 1989, McKibben wrote one of the earliest warnings about the climate crisis with his book, The End of Nature. Since then, much has changed, particularly around the divestment movement, he said.

Ten years ago, the fossil fuel industry was the biggest in the world, and Exxon was the biggest company. “[Exxon is] now besieged and embattled because of the work people have done on many fronts, but divestment being a really important one,” McKibben said.

The way the world is able to produce energy has also changed, with solar and wind coming down in prices and accessibility. “It’s nice to live in a moment where we can move from energy down below to energy up above,” he said.

McKibben, who is Methodist, sensed that it can take time for the 2,000-year-old global Catholic Church to move forward on certain issues. But once it does, there’s an unstoppable momentum that builds up. “That’s the momentum that we desperately need now,” McKibben said.

From the Diocese of Bristol, England, Clare Fussell, Diocesan Environment Officer, shared how their net-zero by 2030 campaign began with a small group of volunteers who “had a real heart and passion for creation care.”

That small group put together a policy that was later approved and changed the diocese. “That was the start,” she said.

The Bishop of Limerick, Ireland, Monsignor Brendan Leahy, pointed out how the current reality is “unsustainable,” as scientists have made clear in recent years.

“Divestment from fossil fuels and re-investment in renewable energies Is clearly the way forward to protecting our common home from climate change and pollution,” he said.

The Diocese of Bristol and the Diocese of Limerick were two of the 36 faith-based institutions from 11 countries around the world that put their faith into action and announced their commitment to divest from fossil fuels on Monday, one of the largest joint announcements to date.

Cardinal Jean-Claude Hollerich, Archbishop of Luxembourg and President of the Commission of the Bishops’ Conferences of the European Union (COMECE), made clear how Catholic parishes and institutions should proceed.

“We have the moral duty to do it, because we have to do it out of love of God and out of love for our neighbors. God created this world, so how can we say, ‘My God, I love you,’ if we do nothing in order to maintain His creation?” he said.

The Cardinal encouraged all Catholics to write to their bishops and to keep bringing up the urgent need for all institutions to divest from fossil fuels and reinvest in renewable energies.

She shared how fossil fuel extraction projects damage creation in one community after another, and how communities have to deal with the mess and disruption the companies leave behind, including worse health outcomes for people living in surrounding areas.

“You cannot extract all of these fossil fuels from the Earth and burn coal for electricity as we do here, and not have it have a direct negative impact on people, on animals, on planets, on water that is around where you to do that,” she said

This webinar was moderated by Lindlyn Moma, Director of Advocacy for the Global Catholic Climate Movement.