Who would have thought a solemn event handing over a faiths petition to a representative of the UN Climate talks would end with dancing in the aisles and on the stage! Well it happened today.

The faith-based pilgrimages arrived in Paris yesterday and this morning the walkers and cyclists gathered in the Salle de la Légion d’honneur de Saint-Denis, opposite the Basilica of Saint-Denis, to see the various faith petitions handed over to political leaders meeting at COP21 from Monday. It was exciting to see Cardinal Claudio Hummes of Brazil, along with Anglican Archbishop Thabo Makgoba from Cape Town in South Africa and other faith leaders take to the stage to give statements before the presentation. They were surrounded by banners from CIDSE, an alliance of Catholic development agencies, The Global Catholic Climate Movement and other faith-based agencies such as Our Voices and ACT Now for Climate Justice.

Cardinal Hummes spoke out as strongly as he could about the need for a strong climate agreement at COP (Conference of Parties) 21. “2015 has been a special year for the Catholic Church, especially with the launch of Laudato Si’, the papal encyclical on the environment” he said amidst growing cheers. “Then in October my brother cardinals and bishops internationally released a message to COP21 calling for a fair, binding and truly transformational treaty in Paris” he added. He described climate change as a moral issue and there was more cheering when he announced that more than 850,000 Catholics had signed the Global Catholic Climate Petition. “We ask for drastic cuts in carbon emissions below the damage threshold of 1.5 degrees and we must put an end to the fossil fuel era by 2050, he urged. He called for wealthier countries to support a strong climate agreement and concluded with, “tomorrow we support the climate marches around the world”.

Similar calls by organisers of the Muslim Climate Petition, the Pan African Climate Justice Alliance, Our Voices and others were warmly endorsed by an audience already convinced of the need for greater political will to tackle climate change.

Images were shown on the screen of the various pilgrimages to Paris as leaders took up posters spelling out the final figure of the combined faith petitions to present to COP21. One holding a poster was Bishop Bernabé de Jesús Sagastume Lemus of Santa Rosa de Lima in Guatemala.

The final figure was 1,780,528, and a larger poster with the figure was presented to Christiana Figueres, Executive Secretary of the United Nations Framework Convention on Climate Change. It also carried the words, “We have faith in Climate Justice’. She seemed overwhelmed as she thanked those present “for your praying, singing, walking and for being who you are”, pointing out the combined mileage of the walkers encircled the globe seven times. “W reminds us that we are Waking up to what we are doing to this Earth; A Affirms our daily commitment to discern between right and wrong and live our lives according to the highest values; L is about the Love we have for the most vulnerable “and the most vulnerable of all are the unborn who will be most affected unless we change our ways”; K “is the deep Knowing that we are guided by the higher powers when we address the challenge of climate change”. She concluded with, “in that deep knowing may I just say, God bless us all”.

It really was a morning of celebration for the climate activists in the faith communities. When a young woman took to the stage to conclude the event with a rousing song, the audience was ready to celebrate that climate advocacy by faiths had reached the highest level politically, I believe Australian Columban Fr Charles Rue was the first to stand up and start dancing, but almost immediately the audience started to rise, clapping and swaying. Then a great cheer went up when Archbishop Makgoba invited Christina Figueres to join in and she did. Within seconds the line up of church leaders and dignatories had broken up and all were all dancing …..to various degrees. The TV crews went wild!

It was a blessed moment of joy in working together for the common good of the whole Earth community. May that spirit swell tomorrow’s climate marches around the world before world leaders come together for the opening of the Paris climate talks on Monday.

Meanwhile, the Pope sent in his shoes to accompany all those in Place de la Republique…. 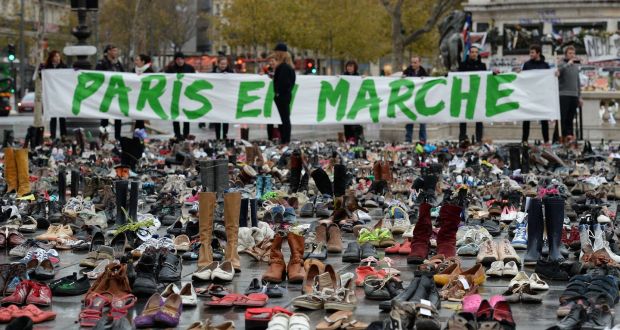