For a mode of production and value creation that is free, fair and sustainable: Michel Bauwens’ recommendations for peer production and commons economics

On April 4, Catholic writer and America magazine author has organized the appearance of Michel Bauwens in Colorado to talk about cooperativism and Commons Economics

The following are some of Michel Bauwens’ conclusions over the past ten years of research, shared in Michel Bauwens, Berlin, October 23, 2015, for the Uncommons conference:

As we have tried to show elsewhere, the emergence of Commons-Oriented Peer Production has generated the emergence of a new logic of collaboration between open productive communities who created shared resources (commons) through contributions, and those market-oriented entities that created added value on top or along these shared commons.  This article addresses the emerging practices that should inspire these entities of the ‘ethical’ economy. The main aim is to create new forms that go beyond the traditional corporate form and its extractive profit-maximizing practices of value extraction. Instead of extractive forms of capital, we need generative forms, that co-create value with and for the commoners.

I am using the form of commandments to explain the new practices. All of them have already emerged in various forms, but need to be generalized and integrated.  What the world and humanity, and all those beings that are affected by our activities require is a mode of production, and relations of production, that are “free, fair and sustainable’ at the same time.

Last November in a conference on platform cooperativism co-organized by Schneider, Bauwens said there is a converging dialogue between the economic commons, participating in creating a shared resource, and making a living through your co-op.  This is why it is essential that we consider these two models together and change the old co-op practice to adapt it to creating commons, together.

Closed business models are based on artificial scarcity. Though knowledge is a non- or anti-rival good that gains in use value the more it is shared, and though it can be shared easily and at very low marginal cost when it is in digital form, many extractive firms still use artificial scarcity to extract rents from the creation or use of digitized knowledge. Through legal repression or technological sabotage, naturally shareable goods are made artificially scarce, so that extra profits can be generated.

This is particularly galling in the context of life-saving or planet-regenerating technological knowledge. The first commandment is therefore the ethical commandment of sharing what can be shared, and only creating market value from resources that are scarce and create added value on top or along these commons. Open business models are market strategies that are based on the recognition of natural abundance and the refusal to generate income and profits by making them artificially scarce.

More information on this is available at http://p2pfoundation.net/Category:Business_Models

Many new more ethical and generative forms are being created that have a higher level of harmony with the contributory commons. The key here is to choose post-corporate forms that are able to generate livelihoods for the contributing commoners.  Open cooperatives in particular would be cooperatives that share the following characteristics.  They are:

I often add the fourth condition that they should be global in organisational scope in order to create counter-power to extractive multinational corporations.

Cooperatives are one of the potential forms that commons-friendly market entities could take. We see the emergence of more open forms such as neo-tribes (think of the workings of the Ouishare community), or more tightly organized neo-builds, such as Enspiral.org, Las Indias or the Ethos Foundation. Yet more open is the network form chose by the Sensorica open scientific hardware community, which wants to more tightly couple contributions with generated income, by allowing all micro-tasked contributions in the reward system, through open value or contributory accounting (more below).  Find more information on this at http://p2pfoundation.net/Category:Open_Company_Formats

Peer production is based on distributed tasks, freely contributed by a open community-driven collaborative infrastructure. The tradition of salaries based on fixed job description may not be the most appropriate way to reward those that contribute to such processes. Hence the emergence of open value accounting or contributory accounting. As practiced already by Sensorica, this means that any contributor may add contributions, log them according to project number, and after peer evaluation is assigned ‘karma points’. When income is generated, it flows into these weighted contributions, so that every contributor is fairly rewarded. Contributory accounting, or other similar solutions, are important to avoid that only a few contributors more closely related to the market, capture the value that has been co-created by a much larger community. Open book accounting insure that the (re)distribution of value is transparent for all contributors.  More information is available at http://p2pfoundation.net/Category:P2P_Accounting

The copyleft licenses allow anyone to re-use the necessary knowledge commons on the condition that changes and improvements are added to that same commons. This is a great advance, but should not be abstracted from the need for fairness. When moving to physical production which involves finding resources for buildings, raw materials and payments to contributors, the unfettered commercial exploitation of such commons favours extractive models. Thus the need to maintain the knowledge sharing, but to ask reciprocity for the commercial exploitation of the commons, so that there is a level playing field for the ethical economic entities that do internalize social and environmental costs. This is achieved through copyfair licenses which, while allowing full sharing of the knowledge, ask for reciprocity in exchange for the right of commercialization.  More info on this is available at: http://p2pfoundation.net/Category:Licensing.  Co-create the resource or get a license.

5. Practice solidarity and mitigate the risks of life and work through Commonfare practices

As one of the strong results of financial and neo-liberal globalization, the power of nation-states has gradually weakened, and there is now a strong and integrated effort to unwind the solidarity mechanisms that were embedded in the welfare state models. As long as we do not have the power to reverse this slide, it is imperative that we reconstruct solidarity mechanisms of distributed scope, a practice which we could call ‘commonfare’. Examples such as the Broodfonds (NL), Friendsurance (Germany) and the health sharing ministries (U.S.), or cooperative entities such Coopaname in France, show us the new forms of distributed solidarity that can be developed to deal with the risks of life and work.  Find more information on this at http://p2pfoundation.net/Category:P2P_Solidarity

6.  Use open and sustainable designs for an Open Source Circular Economy

Open productive communities insure maximum participation through modularity and granularity. Because they operate in a context of shared and abundant resources, the practice of planned obsolescence, which is not a bug but a feature for profit-maximizing corporations, is alien to them. Ethical entrepreneurial entities will therefore use these open and sustainable designs and produce sustainable good and services….”  More info is available at http://p2pfoundation.net/Category:Design

7.  Move beyond an exclusive reliance on imperfect market price signals towards mutual coordination of production through open supply chains and open book accounting

What decision-making is for planning, and pricing is for the market.  Mutual coordination is for the commons!  We will never achieve a sustainable ‘circular economy’, in which the output of one production processes is used as an input for another, with closed value chains and which every cooperation has to be painfully negotiated in the conditions of lack of transparency. But enterpreneurial coalitions who are already co-dependent on a collaborative commons can create eco-systems of collaboration through open supply chains, in which the production processes become transparent, in through which every participant can adapt his behaviour based on the knowledge available in the network. There is no need for over-production when the production realities of the network become common knowledge.  More information is available at http://p2pfoundation.net/Category:Mutual_Coordination

What is light is global, and what is heavy is local”: this is the new principle animating commons-based peer production in which knowledge is globally shared, but production can take place on demand and based on real needs , through a network of distributed coworking and microfactories. Certain studies have shown that up to two-thirds of matter and energy goes not to production, but to transport, which is clearly unsustainable. A return to relocalized production is a since qua non for the transition towards sustainable production.  More information is available at: http://p2pfoundation.net/Category:Sustainable_Manufacturing

Platform cooperatives, data cooperatives and fairshares forms of distributed ownership can be used to co-own our infrastructures of production.  The misnamed sharing economy from AirBnB and Uber shows the potential of matching idle resources. Co-working, skill-sharing, and ride-sharing are examples of the many ways in which we can re-use and share resources to dramatically augment the thermo-dynamic efficiencies of our consumption.

In the right context of co-ownership and co-governance, a real sharing economy can achieve dramatic advances in reduced resource use. Our means of production, inclusive machines, can be mutualized and self-owned by all those that create value.  See more information at:  http://p2pfoundation.net/Category:Sharing

Generative forms of capital cannot rely on a extractive money supply that is based on compound interest that is due to extractive banks. We have to abolish the 38% financial tax that is owed on all goods and services and transform our monetary system, and substantively augment the use of mutual credit systems.  More information on this is available at: http://p2pfoundation.net/Category:Peerfunding 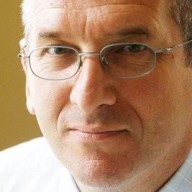 Michel Bauwens is the founder and director of the P2P Foundation and works in collaboration with a global group of researchers in the exploration of peer production, governance, and property. Bauwens travels extensively giving workshops and lectures on P2P and the Commons as emergent paradigms and the opportunities they present to move towards a post-capitalist world. In the first semester of 2014, Bauwens was research director of the floksociety.org which produced the first integrated Commons Transition Plan for the government of Ecuador, in order to create policies for a ‘social knowledge economy’. In January 2015 CommonsTransition.org was launched. Commons Transition builds on the work of the FLOK Society and features newly revised and updated, non-region specific versions of these policy documents. Commons Transition aims toward a society of the Commons that would enable a more egalitarian, just, and environmentally stable world. He is a founding member of the Commons Strategies Group, with Silke Helfrich and David Bollier, who have organised major global conferences on the commons and economics.