Were it not for the venue’s roof, it really would have felt as though we were taking a stroll through Buenos Aires’ villas miserias, the poor quarters of the Argentinian capital. Fr. Carlos “Charly” Olivero is at the entrance waiting for us, a cup of maté tea – the traditional Argentinian beverage Francis is so fond of – in his hand. This is Carlos’ second time at the Rimini Meeting. He was there last year to talk about his experience as a priest serving in the peripheries. Now his story is an exhibition and for an instant one feels catapulted into a world marked by the beauty of poverty. 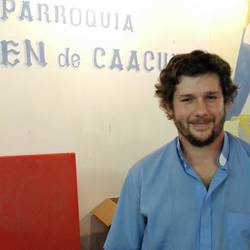 Fr. Charly, the theme of this year’s Meeting is about “deprivation”. What significance does this term have in the villas? Is it just a question of economic poverty?

“The human heart is unique. All of us – from those who live in the villas to those who live in luxury – are lacking something. But in today’s society, the risk is that of being put to sleep by consumerism. We seek fulfilment in material things and adopting behaviours that make it impossible for us to understand what our heart really needs in order to be fulfilled. The villas are the consequence of this perverse system. Today, my young people commit crimes because there is no other way for them to own those objects that promise to fulfil their hearts.”

How can this vicious cycle be broken?

“First let us consider this premise: drugs and prostitution lead to our young people severing human relationships, starting with the family. They are left with a deep sense of loneliness. Our task can be summed up in a [Spanish] verb that the Pope is very fond of: primerear. We must get there before them and stand before their difficult situation. We must establish a direct relationship with them. And the way to do this is not by giving grandiose speeches but by responding to their needs. A relationship that is able to change them just like in a big family, where the elderly help the newcomers. The peripheries aren’t all negative, there are many positive fruits as well. People just need to be given the chance to feel what it’s like to receive a hug.”

Pope Francis invites us to go out to the “existential peripheries”. What impact has this expression had on your life?

“A big one. When Pope Francis was Archbishop of Buenos Aires, I was attending the seminary. In 2002 Bergoglio had the intuition to give seminarians the possibility to build their own personalised paths of formation. Thanks to this decision I was able to visit the villas so I could feel useful and help resolve people’s problems. But it was living with the neighbourhood’s inhabitants that I realised I can no longer live without them. Because it was in moments of difficulty and in poverty that I experienced my own poverty and the love of Christ.”