Co-authored by Patrick Carolan, executive director of the Franciscan Action Network and Lou Leaonard, published in the Huffington Post

On most days, members of Congress focus exclusively on their district, their state, their country. To justify spending time, funding or political capital on any issue, the first step is to show how it helps at home, and the closer to home, the better. It is such common practice, we don’t even think about it. And it makes perfect sense. But what if we could – just for a day – take off our hometown hat and think a little differently. Today should be that day. 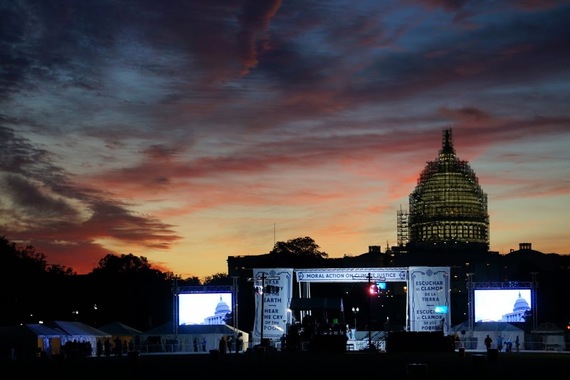 Because after all, wherever we are in this country or this world, we are all connected. Like it or not, we all belong to the same Earth, whose rivers and rains make our lives possible and wondrous. We eat food and buy goods that travel in supply chains that crisscross the globe. And increasingly our economic well-being and security are woven together in a planetary web where events in one corner send tremors that we all feel. It reminds us of our common humanity and our interdependence.

There are few in this world with a truly global vantage point, who consider their home districts to be the entire world; those who can help us really think as one human family. Pope Francis is one of those people.

But his global vantage point is not the only reason why it is appropriate that this particular Pope make history by speaking before a joint session of Congress. Pope Francis has dedicated much of his papacy to issues that concern not just the world’s 1.2 billion Catholics, but all of the world’s people: Human trafficking and slavery, social inequality and poverty, and – perhaps as important as any – our growing ecological and climate crisis.

Climate change is an ultimate, though painful, reminder of our interdependence: Carbon pollution, whether from power plants in Baltimore or Beijing, heat the atmosphere just the same, which melt the Himalayan and Alaskan glaciers, which raise sea levels in Mumbai and Miami. But while we are all connected in this growing threat, we don’t feel its dangers equally. Those who have done the least to cause the problem – including the poorest among us from the smallest island nations to US Gulf Coast — are already paying the highest price. For those of us who have the greatest responsibility for creating this problem and the greatest capability to respond, it is our time to act.

This is the Pope’s message, compassionate cooperation and care for the least of these. Hearing that call, WWF, the world’s largest conservation organization, and the Global Catholic Climate Movement, the largest coalition of Catholic voices for climate action,are joining forces. We’ll begin this partnership today on our National Mall, reflecting the larger truth of that gathering outside the Capitol: an historic coming together of secular and religious people calling for Congressional leadership on climate change. Working together, our two extensive global networks from Australia to East Africa and beyond will urge governments around the world to make 2015 a tipping point.

Today all nations are working at home to set new climate goals ahead of UN climate talks in Paris in December. This is important and unprecedented and should put to rest questions about whether the world is ready to act together.

But to avoid the most devastating effects to people and our planet’s life support system, long-term warming should not exceed 1.5°C. To meet this goal, individual country action is not enough. We need a new era of unprecedented global cooperation to face down this threat to everything we hold dear. This means clear support from the United States in Paris for solutions like the Green Climate Fund that help the most vulnerable face this crisis and assist countries in moving to a cleaner and safer future. Backing and support of members of Congress for this fair outcome in Paris will signal our solidarity with brothers and sisters throughout the planet, while also advancing our own national interest.

This week, Pope Francis’ visit to the United States offers us a moment to step outside of our daily lives and our smaller selves, to remember how connected we are to one another. At this moment in history, the truths and challenges that unite all people are more important than issues that may divide us. And together facing this threat, and so much more, is possible.