If we care about the poor in the US, we’ll raise wages and benefits in the service sector 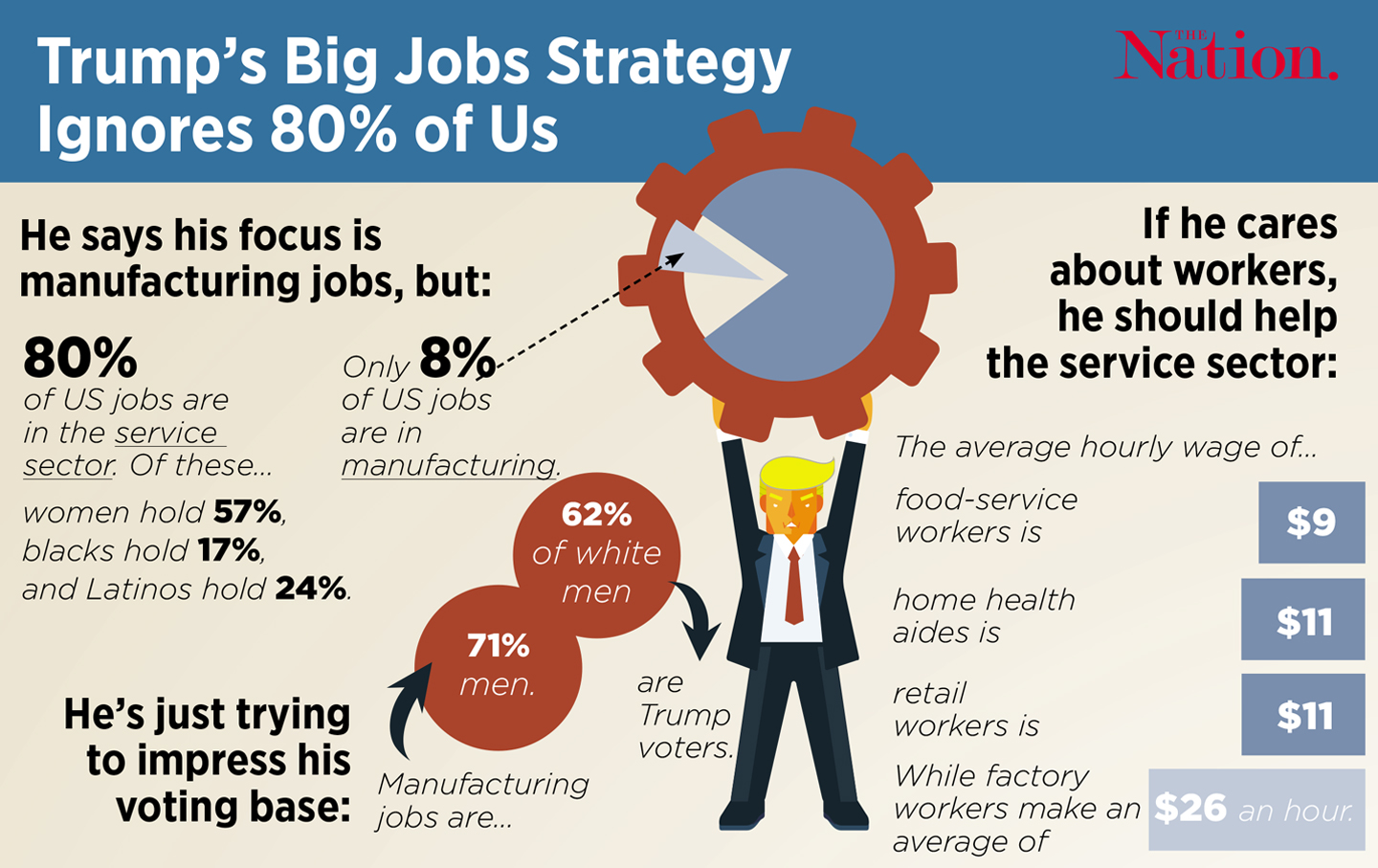 At his inauguration, Donald Trump bemoaned “rusted-out factories scattered like tombstones across the landscape of our nation.” Since his election, he’s boasted about a deal cut with Carrier to keep some of the company’s jobs from moving to Mexico, while either praising or cajoling GM, Ford, Fiat Chrysler, and Lockheed Martin about American jobs. On the first Monday of his presidency, he invited CEOs and labor leaders to meet with him, all culled from the ranks of manufacturing and construction. And in his first postelection press conference, he promised that he would be the “greatest jobs producer that God ever created.”

But Trump’s interest is occupied by one small sector of the economy—manufacturing, which makes up just about 8 percent of American employment. Even when mining and construction are taken into account, these goods-producing industries represent less than 13 percent of US jobs.

Since most of us work in the service sector, why doesn’t Trump look beyond manufacturing?

Why would Trump be so obsessed with jobs that only a small and declining share of Americans today rely on and worry about? Consider who holds them. Men make up more than 70 percent of those working in manufacturing and more than 90 percent of those in construction. Those living near big manufacturing bases were more likely to support Trump; in the end, he won men by 12 points and whites by 21 points.

As Trump talks a big game about manufacturing, he has been silent about the service sector. Macy’s and Lowe’s have announced job cuts; hundreds of retail stores are closing. But Trump has remarked on none of this. Service-sector jobs were entirely absent from his inaugural address. Yet the service sector makes up over 80 percent of US employment. In 1994, there were 3.5 million more people employed in manufacturing than retail, but now those numbers have nearly flipped.

Most Americans are at the mercy of the service sector, and they may not fear just for their job security. They’re worried about the conditions that make their working lives untenable. For starters, many service jobs pay just enough to escape poverty, if that. Home health aides make $10.54 an hour at the median. Retail workers make $10.60. Food and beverage servers make $9.16. Add that up, and even a full-time, year-round job isn’t enough to keep a family of four out of poverty.

These jobs also increasingly don’t guarantee enough hours week to week to make a living, nor do they ensure that workers will have any idea what their hours actually are. At least 17 percent of the workforce has an irregular schedule, making it impossible to schedule child care or a ride to work. The problem is most acute in low-wage service jobs: Only 40 percent of retail workers in New York City say they have a set minimum number of hours every week, and a quarter say they’re often on call. These jobs also frequently deny workers enough hours to earn the money they need. In all, 5.8 million Americans yearn for full-time work but are stuck with part-time hours.

Having a job, then, is just the start of the arduous struggle toward financial security for a large number of Americans, across genders and colors. But you won’t hear them or their issues mentioned by President Trump. Instead, he appears bent on ignoring the realities of the workforce in order to pander to the segment of America that sent him to the White House.