September 5, 2016
As the world’s population soars past 7 billion, farmland and freshwater are becoming increasingly valuable resources. Which is why a growing number of companies and investors — Wall Street traders, Chinese state corporations, Gulf sheiks — have been buying up farmland abroad.

The land trade has been booming since 2007, when a spike in grain prices got everyone fretting about shortages. The purchases help countries like China and Saudi Arabia secure food supplies and conserve water domestically. But critics worry that the trade has also spurred a rise in “land grabs” — when sellers in countries like Ethiopia or Cambodia forcibly acquire the farmland from locals in the first place.

So how big is the trade? A 2014 study in Environmental Research Letters found that at least 126 countries are now involved in purchasing or selling global farmland. The most active buyers are investors in the United States, China, Britain, Germany, India, and the Netherlands. They’re typically seeking out land in South America, Africa, and Asia — particularly Brazil, Ethiopia, Philippines, Sudan, Madagascar, Mozambique, and Tanzania. The trading map looks like this:

The color of the node shows to what extent a country is an importer (gray) or an exporter of land (red), and the size of the node represents the number of trading partners. The links represent the flow of land acquired by an importer from an exporter. Link colors are that of the importing node. (Seaquist et al, 2014)

The top 20 countries in the global land trade network, ordered by the largest number of trading partners. (Seaquist et al, 2014)

It all adds up: In 2013, a separate study in the Proceedings of the National Academies of Sciences estimated that between 0.7 percent and 1.75 percent of the world’s agricultural land was now being transferred to foreign investors from local landholders. That’s an area bigger than Germany and France combined.

Why are people buying farmland abroad?

The PNAS study found that foreign investors frequently buy tracts of land that have ample supplies of freshwater, through either local rainfall or underground aquifers. Water has become especially valuable given that supplies are increasingly under strain in countries like China, India, and the United States.

ABOUT 21% OF THE LAND IS USED TO GROW BIOFUELS

But why land? Why not just import food from these countries directly? In part because there are potential gains from buying up and improving underdeveloped land in places like Africa.

“This is often good agricultural land that isn’t yet fully utilized,” Paolo D’Odorico, one of thePNAS study’s co-authors, told me when that study came out. “It was being used by local farmers without modern technology, without irrigation, without fertilizer.”

Once the land is purchased, large commercial farms will often come in and improve production to cultivate their own crops. A 2010 World Bank paper estimated that 37 percent of this newly acquired land is used to grow food crops, 21 percent to grow cash crops and 21 percent to grow biofuels. (Roughly 27,400 square miles of land land have been bought up in Indonesia, largely to grow palm oil, which can be turned into biodiesel.) 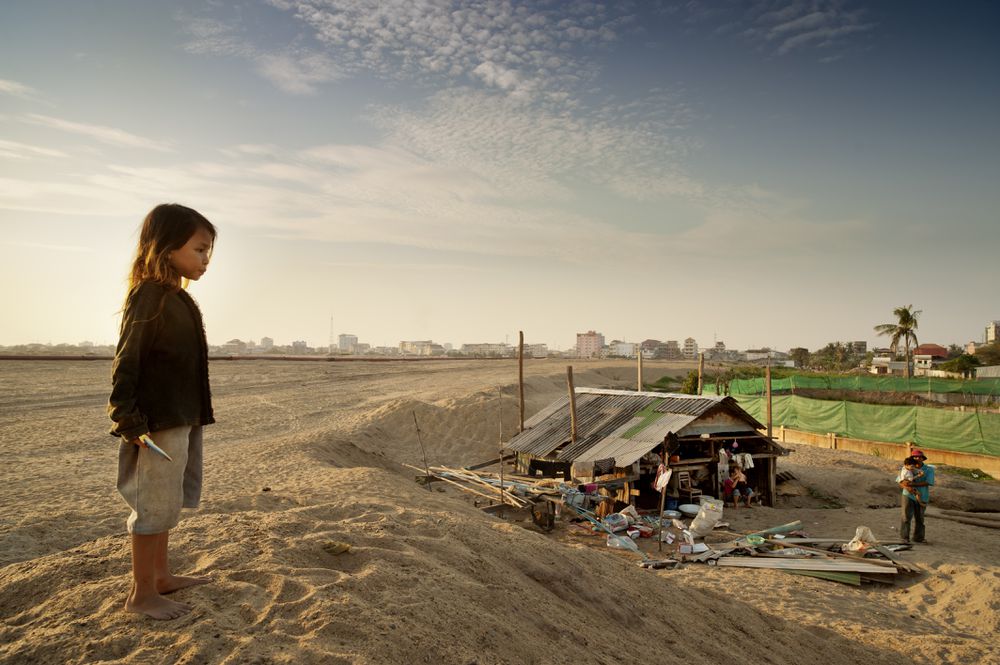 The Ken Chathas family is the only family left near the Boeung Kak lake near Phnom Penh after other houses were demolished by land grabbers. Land grabbing has become a serious issue in Cambodia in recent years. Thousands of people get evicted from their homes and receive no compensations. Jonas Gratzer/LightRocket/Getty Images

In theory, these land trades can be mutually beneficial — if foreign investors are coming in and squeezing more productivity out of the farmland than the locals can, everyone should win. And, in many cases, these trades do appear to go off without a hitch.

But in some regions, there are real concerns about how the land gets acquired in the first place. These are the “land grabs.” In 2012, Human Rights Watch released a reportalleging that the Ethiopian government was forcibly relocating tens of thousands in order to lease land to foreign investors from China and the Gulf states. “The first round of forced relocations occurred at the worst possible time of year — the beginning of the harvest,” the group warned. “Government failure to provide food assistance for relocated people has caused endemic hunger and cases of starvation.”

Human-rights activists have raised similar concerns about land grabs in Cambodia. Government officials frequently take advantage of the country’s weak property rights system to evict poorer farmers from their land. By some estimates, the state has now leased or sold off two-thirds of the country’s most fertile land to large agricultural firms overseas

Even in places where there’s no violence involved, some observers have warned that these land deals can raise troubling questions. A 2010 World Bank report argued that farmers in poorer countries often lack the ability to make fair trades with overseas investors — because of weak property rights, say, or poorly enforced contracts. (In some parts in Africa, village chiefs might be making deals on behalf of the community, without their knowledge.)

Other critics have argued that it seems perverse for countries that are struggling to feed themselves to give up control of their soil and freshwater. The PNAS study, for instance, points out that Sudan is leasing much of its best farmland on the banks of the Blue Nile to overseas investors who are exporting food out of the country. Meanwhile, much of the population in this otherwise dry country has become increasingly dependent on food aid and subsidies.

The farmland trade is likely to become more popular

The pros and cons of the farmland trade are still an area of much dispute — in part because there’s so little data on the actual specifics here. Only recently have researchers estimated how much land and freshwater was actually being bought and sold. And there are plenty of questions remaining: Where do the crops grown on traded land actually go? How much do yields improve when foreign investors move in? What happens when locals became laborers for foreign commercial farms rather than small farmers?

Land-trading is only likely to become more popular in the years ahead — especially if grain prices ever spike again or if more governments get nervous about securing food supplies. And many onlookers are worried about a corresponding rise in land grabs. Fred Pearce, who investigated the practice for his 2012 book The Land Grabbers, put it this way in an interview with the Guardian: “Land grabbing is having more of an impact on the lives of poor people than climate change.”