Laudato Si: A Recognition that Everyone is Our Neighbor

It comes from the basic message that’s in all major traditions. It’s worded differently, but it is to love God and to love your neighbor as yourself. And who is our neighbor? Our neighbors are those next to me. They’re the future generations, the children. They’re brothers and sisters who are economically challenged. They are the refugees and immigrants who are being affected by climate change. And my neighbor is also, as St. Francis of Assisi would say, everyone and everything. All the elements, all of the creatures, the plants. What it really comes down to is: Am I following this basic command to put love into action? 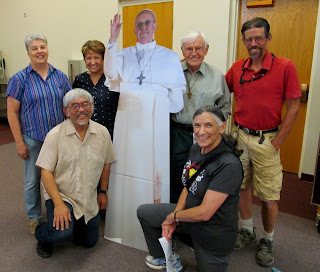 Sister Joan Brown, executive director of New Mexico Interfaith Power and Light, was the featured presenter at a program on Laudato Si, the Paris Climate Talks and congregational efforts to promote sustainability on Thursday, May 26. Other faith leaders in Albuquerque, including Norbertine Father Bob Campbell have also put together great presentations on Laudato Si, Pope Francis’ encyclical letter on the environment.
Here is a 5-minute excerpt from  the reflections from Sister Joan, who attended the COP21 climate talks in Paris on behalf of Franciscans International and the national Interfaith Power and Light. The program also featured brief presentations from Judy Traeger (a parishioner at St. John XXIII), Gary Gunthorpe (a member of the solar team at St. Mark’s Episcopal Church) and Rev. Arkad Biczak (pastor at St. John XXIII Catholic Community). A few photos are posted below the video.