Moving beyond “thoughts and prayers” on the climate: it’s past time to get on the 1.5 C path say youth, scientists at Vatican conference

“Saving our common home and the future of life on earth,” conference on the third anniversary of Pope Francis’ encyclical Laudato Si’ on the protection of our common home.

As Msgr. Bruno Marie Duffé, secretary of the Dicastery for Integral Human Development, told us, “we can no longer accept that the appropriation and exhaustion of natural resources should continue to enrich a small number of people while endangering the lives of the poorest.”

Laudato Si’ and the urgency of the present moment: Participants at a Vatican conference discussing the devastating impact of climate change are convinced of the urgent need to act 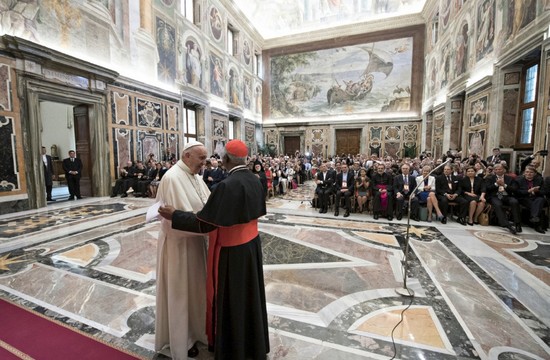 An international conference on the future of “Our Common Home” was held at the Vatican on July 5-6. During the meeting, Pope Francis called for a greater commitment on the part of polluter nations and from financial bodies. (Photo by VaticanMedia-Foto/CPP/CIRIC/Catholic Press Photo)

“The time has come to act immediately. We are calling on decision makers to take concrete action to save our planet and we call on the Catholic Church to give an example through its witness.”

These were some of the messages from the young and not so young people, indigenous communities from Amazonia and “Pacific Warriors” who came to Rome in response to Pope Francis’ appeal for an ecological conversion.

Nearly 400 people accepted a Vatican invitation to attend a July 5-6 conference, entitled “Saving our common home and the future of life on earth,” to mark and celebrate the third anniversary of Pope Francis’ encyclical Laudato Si’ on the protection of our common home.

All committed to climate justice

Participants included Christians and non-Christians, scientists, artists, politicians, economists and activists, all involved in various ways in working for climate justice and the protection of a dignified life on earth.

All felt challenged by the increasing urgency to act and bring pressure to bear to achieve a firm commitment from states and other parties in the COP24 climate negotiations to be held in Poland next December.  As Msgr. Bruno Marie Duffé, secretary of the Dicastery for Integral Human Development, told us, “we can no longer accept that the appropriation and exhaustion of natural resources should continue to enrich a small number of people while endangering the lives of the poorest.”

The young people present understood how to attract the attention of plenary hall. We do not have the luxury of time, they said, appealing to us – their elders – “to give them a chance” on this earth.

A variety of scientists, politicians and economists also shared their respective observations.

The alarming speed of climate change caused by human behavior and the choices we make threaten the very survival of species, water and air quality as well as food security. These are huge challenges.

However, we also heard from the representatives of the indigenous communities and the “Pacific warriors” that, on top of the risk to other species, human life is also under threat.

Hence, demands for implementation of the Paris Agreement are an absolute minimum and in fact do not go far enough.

The 2°C ceiling for planetary warming exceeds what is really acceptable. All the various views expressed in recent days confirm this.

For some of us, this appeal for action goes beyond logical or intellectual understanding. Rather, it is a cry from the heart, from the depths of the forests, a cry heard through the music and beauty of Creation that we need to protect against our human behavior.

For those who make up the great family of the Catholic Church, we also feel the moral and ethical moral responsibility to act, to witness to this ecological conversion and to carry forward the cultural revolution that the pope has spoken of.

In his address to meeting participants, Pope Francis told us that there is still time to correct our aim.

Starting from now, all of us need to make deep and radical changes in our lifestyles, economic choices, indeed, in our very definitions of progress, development and flourishing.

The earth and dignified life on this earth are common goods. We must be ready to defend them with all the gifts and talents at our disposal. And we need to do so together in solidarity with each other.

Josianne Gauthier is the Secretary General of CIDSE, an international alliance of Catholic development agencies working for global justice.

In releasing the document, CIDSE said it wanted to encourage governments to respond to climate change in a way that reflects the spirit of Pope Francis’s landmark encyclical Laudato Si’, which many credit for having a significant impact on the passing of the 2015 global climate deal in Paris.

Like others watching the international talks, CIDSE noted that two years after that agreement, countries have done little to fulfill their climate commitments, while the United States has even left the agreement.

“While the Paris Agreement saw countries agree to limit global temperature increases to no more than 1.5 – 2 degrees above pre-industrial levels,” CIDSE said in today’s announcement, “forecasts suggest that current pledges to limit carbon emissions based on our current economic and development models will fall far short of meeting this target.”

Speaking at COP23, Father Bruno Marie Duffé, secretary of the Vatican Dicastery for Promoting Integral Human Development, who is representing the Holy See at the talks, said: “We should not underestimate the importance of the moment we are in now. We are in the middle of the river, and we cannot go back. We have to be together, and we have to be strong, even if one state decides to go back. We have had the Paris agreement and now we have to move from the ethical intentions to making the political happen, and to do that we will need a new model of development that is rooted in dialogue and mutual solidarity, and that recognizes the talents that each party has to contribute.”

“It is time that people and their solutions become the center of urgent and ambitious climate action.” Josianne Gauthier, Secretary General at CIDSE

Josianne Gauthier, Secretary General at CIDSE said: “Through the paper we want to reinforce the urgency of the Pope’s call for transformation in Laudato Si’. Options exist, human ingenuity and creativity exist and local and indigenous knowledge. It is time that people and their solutions become the center of urgent and ambitious climate action.”

Climate Action for the Common Good says that governments should ask searching questions about their plans to tackle climate change. It suggests that countries consider how climate action can address poverty and human rights, whether the ambition shown matches the scale of the challenge, if their national climate plans encourage the participation of all people, and how the world can transition to a zero-carbon world in a way that does not negatively impact on the poorest and marginalized in society.

As temperatures rise and extreme weather increases around the world, 2018 offers pivotal opportunities to turn the tide on climate change. To guide our work for the year ahead, 12 staff members from Global Catholic Climate Movement gathered in Rome and Assisi, heartlands of our faith, for a strategic planning meeting.

Coming from Ecuador, Brazil, Poland, the United States, and elsewhere in Italy, our staff brought global perspectives to the shared goal of caring for our common home. Below are 4 highlights of our week together.

During a papal audience, executive director Tomás Insua greeted Pope Francis and discussed a few of GCCM’s top initiatives for 2018. During their conversation, Tomás gave the pope a rosary that was handmade by a Laudato Si’ Animator. The rosary was strung with beads created from the seeds of a tree that grows in the Ecuadorian Amazon. It was a unique gift, celebrating Pope Francis’ special concern for the Amazon and its peoples.

2: Collaboration with the Vatican

GCCM enjoyed a long and wide-ranging conversation with the Vatican’s Dicastery for the Promotion of Integral Human Development. The dicastery is the Vatican office responsible for the implementation of Laudato Si’.

The conversation, which was shared by the secretary and several key staff members, strengthened the bonds we share. Aligning our plans is a valuable opportunity to work together in pursuit of mutual goals.

Throughout 2018 and beyond, GCCM will closely collaborate with the dicastery to support its mission. Contributing to the dicastery’s work in animating the Church to achieve measurable reductions in greenhouse gas emissions is a top priority.

3: Roots and growth in Assisi

Assisi is the spiritual home of all those who follow St. Francis, patron saint of ecological service. The bishop of Assisi, Abp Sorrentino, graciously led two masses for GCCM staff and friends, one at the site of St. Francis’ renunciation and one at St. Francis’ tomb.

Following mass at the tomb, Fra Mauro Gambetti warmly opened the doors of the Sacro Convento, where he is the custodian responsible for the care and maintenance of this centuries-old institution. GCCM staff ate with the friars and guests in their dining hall and enjoyed a tour of the frescoes in the basilica.

For Season of Creation 2018, GCCM will coordinate an ecumenical prayer service in the Sacro Convento with high-level leaders from several Christian traditions. This event will be one of several on the theme of “pilgrimage” to illuminate the season in advance of the COP24 talks in Poland.

During our week together, the GCCM team reviewed projects that will mobilize the Church to address the climate crisis, following the call of our faith to protect creation and the most vulnerable. Campaigns for Earth Day, Season of Creation, the Global Climate Action Summit, and COP24 were developed. As importantly, the bonds of friendship were strengthened and renewed.

Working together and guided by the Holy Spirit, GCCM staff remain extraordinarily committed to drawing on the unique strengths of the Catholic Church to solve the climate crisis.

We look forward to collaborating with you and the wider Church in bringing Laudato Si to life.