Costs are going down rapidly in the solar technology industry. Engie, the French multinational electric utility company is planning to start producing a range of easily installable, flexible photovoltaic films.  These panels have been developed using what is called organic photovoltaics. Instead of silicon, they are made of a very fine layer of carbon and are flexible rather than rigid, which changes everything. “They look like plastic layering and are increasingly transparent,” explains Engie’s CEO. 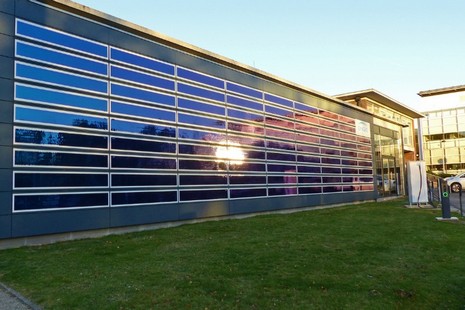 Engie is scheduled in September to start testing a new kind of solar panel designed to be installed on buildings in Rochelle.

The announcement was made by the company’s chief executive, Isabelle Kocher, on Thursday, 15 June, at the VivaTech trade fair which showcases new technologies.  After initial tests, large-scale production will follow.

The new generation of solar technology

These panels have been developed using what is called organic photovoltaics. Instead of silicon, they are made of a very fine layer of carbon and are flexible rather than rigid, which changes everything.

“They look like plastic layering and are increasingly transparent,” explains Engie’s CEO.

They were developed by Heliatek, a young German company of which Engie took a 6.6% stake last September.

“The sector has gone through enormous advances and Heliatek is really at the forefront internationally when it comes to innovation”, adds Thierry Lepercq, Engie’s executive vice-president, who also heads the innovation section.

Lepercq says that just a few years ago, these films only reached a 3% output, compared with 20% for traditional panels, and they lasted just six weeks. Today their output is almost the same as panels and they can last for 20 years.

So far Heliatek has installed them on around one hundred buildings all over the world.

As is the case across the solar industry, organic photovoltaic technology is going through a dramatic drop in production costs. According to Lepercq, costs are now as low as between €80 and €100/MWh.

If you look at the latest invitation for tender for large-scale power station production in France, their costs are €62.50.

“The costs involved in the new photovoltaic film technology are dropping every quarter and we’re certain they will be economically viable without subsidies”, says Isabelle Kocher.

The price of the films could come down even more dramatically if they are integrated into construction materials or tiles or glass panes. Large companies like Saint-Gobain are following developments closely.

Engie is fast-tracking its energy shift

Since  Kocher took the reins a year ago, the gas company has expanded its involvement in renewable energy projects, by increasing its own production and investment in other innovative businesses. It has also just sold its oil and gas exploration and production units.

Kocher makes it clear that this transition in the energy sector is irreversible and that the situation is going to develop far more rapidly than we think.

“Our dreams are no longer unreachable”, she says, reminding us that Engie now installs 2,000 solar panels per day.

Dependency on gas is still significant

It all begins to sound very convincing, but it is worth remembering that the company still makes more than 40% of its operating profit through gas.

Engie has just signed a partnership agreement with Solar Impulse Foundation, run by Bertrand Piccard, for another original adventure. They have given themselves the challenge within one year of finding the best 1,000 solutions for environmental improvement, solutions which are to be profitable and unsubsidized.

The goal is to encourage governments to assist development through an appropriate regulatory framework.