Ongoing drought and 70% of groundwater used – More than half of Iran’s provinces could become uninhabitable within 15 years, displacing millions of people

Iran is in the grip of a seven-year drought that shows no sign of breaking and that, many experts believe, may be the new normal. Even a return to past rainfall levels might not be enough to head off a nationwide water crisis, since the country has already consumed 70 percent of its groundwater supplies over the past 50 years.  More than half of Iran’s provinces could become uninhabitable within 15 years, displacing millions of people.  In Tehran, officials barely managed to keep the water running this summer as reservoirs shrank to dangerously low levels. 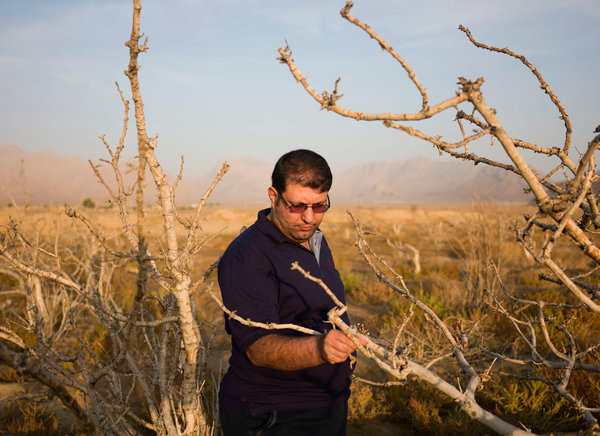 In Zanjan, in central Iran, the historic Mir Baha-eddin Bridge crosses a riverbed of sand, stones and weeds. In Gomishan, on the shores of the Caspian Sea, the fishermen who once built houses on poles surrounded by freshwater now have to drive for miles to reach the receding shoreline. In Urmia, close to the Turkish border, residents have held protests to demand that the government return water to a once-huge lake that is now the source only of dust storms.

More than 15 percent of the approximately 150,000 acres of pistachio trees in the main producing area in Kerman Province have died in the last decade or so.

A nationwide network of dams, often heralded by state television as a sign of progress and water management, is adding to water shortages in many places while helping deplete groundwater. In Isfahan, the once-iconic Zayanderud River is now a dusty scar the size of the Seine snaking through the city, because officials were forced to divert its water to the desert city of Yazd.

In Tehran, officials barely managed to keep the water running this summer as reservoirs shrank to dangerously low levels. Subsidies for water and electricity encourage overconsumption in urban areas. Isa Kalantari, a former minister of agriculture, warns that more than half of Iran’s provinces could become uninhabitable within 15 years, displacing millions of people.

As in drought-stricken California, agriculture accounts for about 90 percent of water consumption in Iran. And here, matters are not helped by the prevalence of crude, centuries-old irrigation methods and other wasteful practices.

Where there are no longer rivers and lakes to be tapped, desperate farmers and municipalities are turning to dwindling groundwater supplies. Drillers report that they are increasingly coming up dry, even at depths of more than 600 feet. When they do find water, they say, it is often polluted with heavy metals and arsenic, released as the drill bits break through sediment.

The changing landscape is all too visible in Kerman Province. In a not-so-distant past, the area was a beltway of green stretching for hundreds of square miles, using groundwater to produce grain and pistachios. Now, the sun bakes treeless plains that are increasingly giving way to deserts. During storms, the dead trees lose their branches, turning them into stumps, while the dust swirls about in ever-growing quantities.

In the dead pistachio grove, a rare rainstorm recently left white lines in the red soil.

“Salt and other things,” Mr. Shoul said — residue from the contaminated water brought up by wells that sucked the last remaining groundwater years ago. He said he had kidney stones, as do many others in the region: a result, he said, of their drinking water from the taps.

“The irony,” he said, “is that I have to drink even more water to reduce the pain.”

Just over 50 miles north, in the city of Sirjan, decisions long postponed have begun to impose themselves on local officials, forcing them to make difficult choices in allocating scarce water supplies.

Wedged between two newly built neighborhoods of five-story apartment buildings, a convoy of water trucks waited in line to fill their 5,000-gallon tanks. Under a deal with the local water management company, up to 400 of these trucks a day draw water from the city’s main well and head to theGolgohar iron mine, the largest such mine in the Middle East. It employs over 7,000 people, many of them from Sirjan, and a water shortage has compounded an already difficult situation brought on by collapsing iron ore prices.

The geopolitical effects of global warming are here and in full force. Many of our politicians may stick their heads in the sand and…

Thank you for this article. Sad. Just a little picture of what is going on all over the world. Poor government policies compounding the…

Bonneville salt flats anyone? A dried up lake is hardly something new in earth’s history. Have some perspective people.

“It is internationally unprecedented to carry water with tankers, but we have no other way,” Naser Taghizadeh, chief executive of the Golgohar Iron Ore Company, told the local Negarestan news outlet. “If water is not taken to the complex, projects are stopped, and many people will lose their jobs.”

Residents have objected and even staged a sit-in, but the tankers keep coming for the water, kicking up clouds of fine dust as they drive off. The drivers, often from the city, say they are scorned by their neighbors. “We need to feed our families too,” one of them, Saaed Salimizadeh, said. “When the water runs out, it will run out for all of us. We have to choose between jobs and drinking water.”

Sirjan is by no means alone in its water shortages. In surrounding Kerman Province, 1,455 of 2,064 village reservoirs have dropped below levels needed to sustain the population, according to the local water management agency. The semiofficial Mehr news agency reported in July, citing local statistics, that 541 villages were dependent on tanker deliveries for their water.

It is not just water levels that are declining. “The quality of the water has decreased dramatically, as have the levels of the underground water,” Akbar Mahmoud Abadi, a deputy at the local department of the Ministry of Agricultural Jihad in Sirjan, said in a written reply to questions. “The condition is very worrisome.”

Kerman Province remains one of the largest producers of pistachios in the world, but its irrigation methods are frequently outdated. In one field, a farmer, Ismael Alizadeh, opened an eight-inch water pipe during the middle of the day, under the burning sun, flooding a field of pistachio trees. “We have always done it like this,” he said with a shrug.

Soheil Sharif, a major producer in the area, said other farmers had ridiculed him when he installed a $600,000 drip irrigation system in his 90-acre pistachio grove a few years ago. But now his farm is green, while others around it have dried up.

He blamed the government for keeping energy and water prices low, saying that he paid only $270 a month for his electricity bill, covering his huge pump and 20 employees. “It’s ridiculous,” he said. “And while we have no water, its price is also dirt cheap.”

His investment has paid off, Mr. Sharif, 44, acknowledged. “I have bought myself another 15 years,” he said as he walked among freshly picked pistachio trees. That is just enough to last to his retirement.

“After that,” he said, “this place, like everything else here, is done for.”