People don’t last long as drivers in traffic here: it makes them sick. See details about how deadly traffic pollution is

In this West African nation, “zémidjans” are everywhere. Two of these drivers spoke to “La Croix” about their faith. 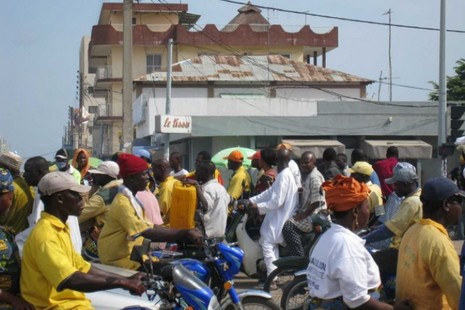 “This work involves a lot of risks. It’s not a job: it’s a life of misery. You wouldn’t wish this on anyone,” says Cosme Lonmandon, a 42-year-old Catholic who is one of about 72,000 motorcycle-taxi drivers in Cotonou, Benin’s largest city.

InFon, the most widely spoken language in Benin, the word “zémidjan” means “Get me there fast”. Thousands of Beninese work as full or part time zémidjans. In fact, one of the most noticeable features of this West African country is the enormous number of motorcycles – the main means of transport.

Cosme, who is married with children, had no choice but to do this job, after going through a difficult time.

“I used to be a spare parts salesman at the international market at Dantopka. Then, I had some problems and had to become a motorcycle-taxi driver in order to survive,” he explains. “It will soon be the hour for prayer. I’m sure that, one day, I’ll find something better.”

For Cosme, prayer is a source of strength and hope. He refuses to give in to despair.

Standing in front of his bike, his face serious, he stares at his shoes, lost in thought. He remembers many occasions when fellow zémidjans were subjected to abuse by the bike owners who they work for. He also recalls the insults of some customers.

In spite of the inherent job insecurity of this work, Cosme doesn’t have any insurance cover. He mentions that quite a few of his co-workers “don’t last long doing this job – they get sick.”

However, hopefulness and optimism soon light up his face: he is convinced that one day, “the hour of prayer will come”, and he will find a job that comes nearer to fulfilling his hopes.

Michel Gahou, another zémidjan, often attends the evangelical Assembly of God Church. He works part-time as a zémidjan. He tells us that he began working in this industry as a way of earning some pocket money while he was an apprentice mechanic.

Marcel only allows himself a break of six hours a day. He drives his bike for 8 to 12 hours before going back to his security guard job.

“Being a zémidjan is nothing to complain about,” he says. “It’s something to do. There’s no work in Benin. Some of us are university graduates who can’t get a job or young people who have lost their jobs.”

Nonetheless, Marcel lives his life of financial insecurity with faith. He declares, without hesitation, that “life, in itself, is a miracle.”

A native of Ouidah, a coastal city in Benin, he has survived some dire tests. A former believer in voodoo, Marcel chose to be baptized in the Church that helped him in his hour of need.

“I was seriously ill in 1996,” he tells us. “Evangelical Christians prayed for me several times during my stay in hospital, and I eventually made a full recovery.”

Inflammation is a process by which the body’s white blood cells and substances they produce protect us from infection with foreign organisms, such as bacteria and viruses. Air pollution triggers this process, which factors into pain, obesity, ADD/ADHD, peripheral neuropathy, diabetes, heart disease, stroke, migraines, thyroid issues, dental issues, and cancer. Medicines are prescribed but root causes are below:

Organ inflammation and/or fibrosis with or from air pollution

Clean Air is Possible, Practical and Affordable!  And it is what people will want when they learn about the risks to their health, their cognition, their children’s and parents’ brains, cancer & lives. Who among us can afford cognitive damage, life threatening inflammation or degenerative diseases from air pollution? Below are highlights from recent research:

Traffic is typically biggest source of urban air pollution, worldwide, even in places where other sources are large factors. We’ve known air pollution is a global killer for decades, but now we know more.

Will CO2 be declared a criteria pollutant in the US?  For most of human evolution and modern history, CO2 levels in the air were in a fairly narrow and low range of 180 to 280 ppm.

Lung & asthma development (do we want to be causing lifelong damage to children?)

Should polluted air be placing your child at risk of autism? Early explosure to PM 2.5, 10, or NOx

We want our children to have the best chances they can in school.  They deserve not to be mentally impaired by the air they breathe!