October 24 – The Philippines is such a symbolic country for our movement. On one hand, Filipinos are leading our movement by collecting more than half of our 200,000 signatures to the Catholic Climate Petition. The Filipino Church is incredibly mobilized, collecting signatures in hundreds of parishes all over the country.

World leaders will meet in the U.N. Climate Summit in Paris (called COP21) in late November 2015, to sign a treaty to tackle climate change. And Filipinos are really concerned and want to make sure that governments are more ambitious to solve the climate crisis, after decades of failed negotiations.

The climax of this mobilization will be the Global Climate March of November 29, when, hours before world leaders meet at COP21, over 1 million people will march to ask political leaders to commit to bold action to solve the climate change crisis. Filipino Catholics are preparing to make massive demonstrations in Manila and elsewhere.

This comes as the latest typhoon slammed into the island nation.  Half a million people have been forced from their homes as torrential rains submerge villages along the coast, and the death toll reached 54.

Inundations from torrential rains in mountain regions caused by Typhoon Koppu cascaded into coastal fishing and farming villages, submerging them in waters up to 3m deep, officials said. 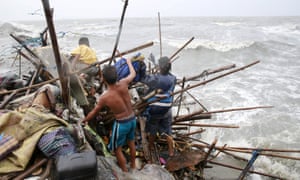 A family living along the coast of Manila Bay search for salvageable items after their house was destroyed by strong winds brought by typhoon Koppu on Sunday.

Residents of Bulacan and Pampanga province, around two hours’ drive from the capital Manila, fled by foot to evacuation centres as the waters rose quickly overnight, aggravated by a high tide.

Winds from the storm reached 210kmh and brought heavy rain, forcing many people to head for safer ground

Koppu made landfall on the east coast of Luzon, the Philippines’ biggest and most populated island, early Sunday the week before last, with 210km-per-hour (130-mile-per-hour) winds.  Koppu, the second strongest typhoon to hit the disaster-weary country this year, then crawled over vast swathes of Luzon for three days, bringing torrential rains that triggered landslides and massive flooding.

A picture provided by the Philippine airforce shows the flooded municipality of Camiling, in Tarlac province. Photograph: PAF-PIO / Handout/EPA

In November 2013, 7,350 people were left dead or missing after the most powerful storm on record, Haiyan, wiped out entire communities in the central islands.  Residents of the Philippines do not need to be convinced about the urgency of climate change and strengthening storms; now they need action and their petitions are calling for it.