In March, leaders from the two most important Amazonian Indigenous organizations of Ecuador and Peru (CONFENIAE and AIDESEP) were joined by nearly 100 indigenous representatives from the Achuar, Shuar, Wampis, Awajun and Kichwa people in a historic Sacred Headwaters summit in the town of Santa Maria de Nieva in the heart of the territories of the Awajun nation of Peru. 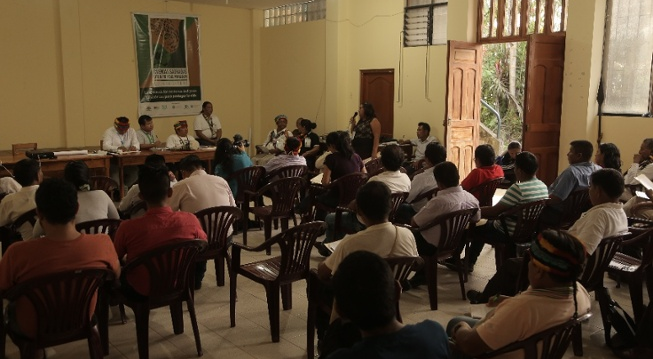 The Sacred Headwaters region of the Amazon, which the indigenous people are now also referring to as Territories for Life, is made up of 60 million acres of tropical rainforest in Ecuador and Peru in the very headwaters of the Amazon River—the most biodiverse region of the planet. Pachamama Alliance has been participating with a coalition of NGOs and indigenous groups on an initiative to secure permanent protection of this region since 2016.

The purpose of the summit was to strengthen alliances of the indigenous nations who—while separated by an imaginary line separating Ecuador and Peru—share ancestry, language, and are connected by the same rivers and face the same threats from extractive industries. 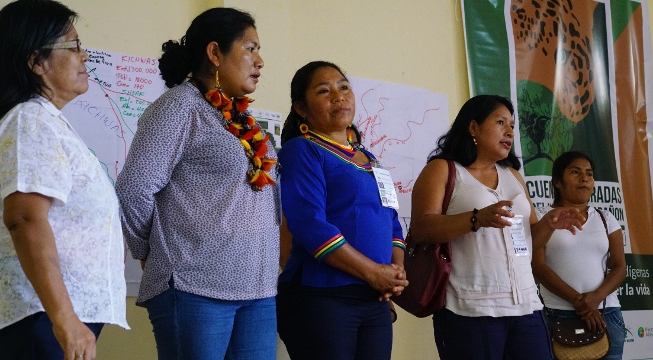 Indigenous women dialogue about the role of women in the Sacred Headwaters Initiative.

This summit is the first in a series of meetings planned over the next several months in communities in Peru where the people on the ground will be educated about their rights, their ancestral lands, and the vision of permanent protection that is the aim of the Sacred Headwaters: Territories for Life Initiative. 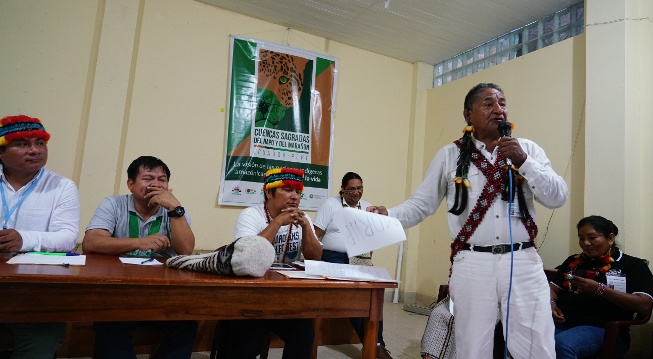 A local Awajun community member speaking at the meeting.

The full press release from Fundación Pachamama can be read below:

Representatives from the two most important Amazonian Indigenous organizations of Ecuador and Peru, Confederation of Indigenous Nations of the Ecuadorian Amazon (CONFENIAE), the Inter-Ethnic Association for the Development of Peruvian Amazon (AIDESEP), were joined by nearly 100 indigenous leaders from the Achuar, Shuar, Wampis, Awajun, Shiwiar, and Kichwa and representatives of Ecuador’s National Indigenous Organization (CONAIE) and the Coordinating Body of Indigenous Organizations of the Amazon Basin (COICA) in a historic Sacred Headwaters Summit on March 2-3 in Santa Maria de Nieva in the province of Condorcanqui in the heart of territories of the Awajun Nation of Peru.

The purpose of the Summit was to strengthen alliances of these indigenous nations who while separated by an imaginary line separating the two countries, share ancestry, language and are connected by the same rivers and face the same threats. Some 20 years after the signing of the Peru Ecuador Peace Agreement, this unprecedented gathering convened indigenous authorities to share their vision and proposals for protecting and maintaining their territories located in the most biodiverse region of the planet, an area of rainforests of supreme importance for global climate stability.

The indigenous organizations and nations share many of the same challenges and threats from industrial scale mega-projects and extractive industries.  That is why they came together to formally join The Sacred Headwaters: Territories for Life Initiative committing to working together to chart a path forward based on fostering respect for indigenous peoples rights, the rights of nature and all life, to confront climate change and the quest for “Buen Vivir”, the collective well being for present and future generations for not only indigenous peoples but for all of humanity.

The Initiative is undertaking a participatory planning process at the level of the Napo-Marañon river basins covering an estimated 25 million hectares based in the cosmology and life plans of each indigenous nation for a common future.  The alliance seeks to halt the expansion of extractive industries, to protect the rainforests important to global climate stability and to create a model for the economic transition of Latin America towards a post-extractive, pluri-nacional, intercultural, and ecological civilization.