Self-sufficient, solar boat on Amazon, now serving more than 60 kilometers of river, territory of the Achuar Indians, between Peru and Ecuador 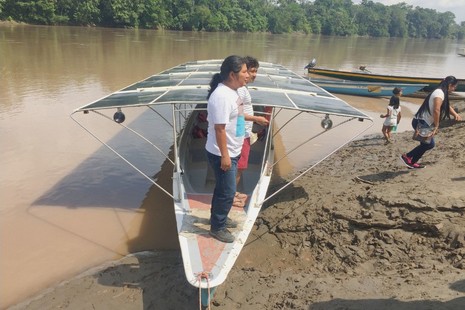 The hull of the boat was constructed on a traditional model that is particularly suitable for river navigation. / Eric Samson

As the solar boat sails slowly along the Aguarico river, its two electric motors can barely be heard.

Launched last month on this tributary of the Amazon in Ecuador, before being transferred to Achuar country, which overlaps both sides of the border with Peru, it was not by chance that it was given the name Tapiatpia, “the electric fish”!

Inside the boat, sheltered from the sun and rain by solar panels that are meant to provide two days of independent operation, several indigenous leaders are evaluating the completion of the “Kara Solar” project that they helped launch five years ago.

“Kara is an Achuar word which means premonition, and now the dream has become a reality,” comments Milton Calliera, himself a representative of the Achuar community in Jivaro, which numbers around 18,500 people.

The boat’s first passengers, who come from the Amazon region or Central America, confirm the need for river transport in the region that is not dependent on fossil fuel.

“In isolated communities, the only way to travel is by boat. However, often there is not enough fuel and families lack the means to pay for a return trip,” explains Candido Mesua, originally from Panama.

And so the idea emerged of a solar boat, a genuine mode of river public transport that is self-sufficient in terms of energy. Yet developing the boat proved to quite complex.

The capacity of the panel to resist shocks or the fall of branches had also to be evaluated when preparing their installation while ensuring that the whole assembly was well balanced.

The hull itself was built according to a traditional design, which is “best adapted for river navigation” according to Utne. When the first prototype of the boat was finally shown to the indigenous organizations of the Amazon region, this did not go unnoticed.

“We have received semi-formal requests from many people in the Amazon region,” notes Michel Laforge, who coordinates the project “Co-Tisseurs de liens” (Co-builders of links), which is managed by the NGO Aldea.

Once in service, the boat Tapiatpia will have the capacity to transport “18 people and more than two tons of merchandise”. It will also enable “nine communities” to be linked along more than 60 kilometers of the river Pastaza, Utne says.

The stops on “the line”, which were decided upon by local residents, will include “nine schools, a college, a clinic and three shamans”.

Later, it is also planned to install a charging station at each stop, although in the beginning, the boat will rely solely on its solar panels.

Avoiding the construction of roads in Achuar country, which is still protected, is the other declared objective of the project.

“Whenever anyone mentions a road, they mean colonization,” comments Celia Salazar of the social enterprise Plan Junto, which helped organize the social aspect of the project.

“However, the people need to be able to move quickly,” she says.

The indigenous communities have been closely involved in the establishment of the project. It is supported by various NGOs that have worked with the local population for more than two years to ensure the sustainability and profitability of the venture.

“We hope to cut the cost of transport by half but it is the inhabitants who will decide the cost of a ticket. We also need to train pilots and mechanics,” adds Salazar.

The Tapiatpia will, therefore, be more than a means of ecological transport. It will form part of an overall process of development of the region.

As Marlon Vargas, president of the Confederation of Indigenous Nationalities of Ecuadorian Amazonia, says: “It is not enough to just say no to oil extraction, it is necessary to develop alternatives.

“The boat is a message to the world that another kind of development is possible.”