The water really does hold us up: From the individual to the personal, faith is never a matter of doctrines and principles; it is first and foremost an action

The second hopeful resource that Teilhard brings to our unsettled times is his unshakable conviction that evolutionary progress will unfold its ultimate triumph in the realm of the personal. Our postmodern temperament has a well-ingrained tendency to regard the world through a filter of distrust, in which we inevitably view evolution as “random,” disconnected, and certainly impersonal. However, Teilhard encourages us to see our planetary home as a coherent and increasingly compassionate whole, steadily plying its way along an irreversible evolutionary trajectory.

In the big picture, there is nothing to suggest that evolution has gone off track. But there is plenty to suggest that we are entering a critical new phase in which some old-order survival strategies (read: the “fight or flight” mechanisms that have ruled our survival thus far) are giving way to a new and more intentional sense of mutual interdependence. The transition appears to already be underway. To continue this turning, it’s crucial that we humans make the evolutionary shift from “individuals” to “persons.”

We typically use these terms interchangeably, but for Teilhard they denote distinctly different, progressive evolutionary stages. An individual lives as an autonomous unit, subject to the old-order laws of “survival of the fittest” and planetary indifference. A person has come to understand themselves as belonging to greater relational field. They now sense their identity from a sense of wholeness in an entirely different order of coherence: a whole greater than the sum of its parts. In this greater whole both unity and differentiation are preserved; meanwhile the whole begins to be infused by a supremely personal tincture or essence. The universe is no longer random, but a system of relationships to which we all belong and are participating in!

A cautionary note: for Teilhard, oneness does not equate simply to some sentimental proclamation of “fellowship” or “let’s all just get along.”

For Teilhard this process of becoming unified is evident in the evolution of the smallest cell to the orbit of our very planet. In fact, says Teilhard, it’s the very direction of how consciousness evolved in the first place! As more complex forms emerged in unified units on our planet, consciousness was able to emerge with it. From this we can gather that the future of spirituality will not be found in the “enlightenment” of a select number of individuals, but will arrive through us collectively as a new “unit,” in the emergence of what we might call the mystical body of Christ.

The rising scent of our common humanity is already in the air, and as we consciously join hearts across the antiquated boundaries of the nationalities and denominations that once defined our identities, the blue biosphere of our planet Earth is being suffused with the gold and scarlet of our common human heart

The third and most powerful wellspring of hope that Teilhard has to offer us—for those with “eyes to see and hearts to hear”—is the assurance that this slow toiling of the planet toward what he calls the “Omega,” the convergent point of all evolution, is not merely some hypothetical, futuristic theory. Omega is neither abstract nor hypothetical; it is already present, actively permeating the earth with its energy. “I probably would never have dared to consider or form the rational hypothesis of it,” Teilhard writes, “if I had not already found in my consciousness as a believer not only the speculative model for it, but its living reality.” [1]

That “living reality,” is for Teilhard the radiant heart of Christ, which he first met as a child and which continued to grow in him throughout his life as a palpably real and personal presence. Not only his own heart but the entire planet was increasingly enfolded within the experiential realm of “the Christic.”

While the way in which Teilhard incorporates Christ into evolution makes some uncomfortable, in the grand tapestry of Teilhardian seeing, the warp of science and the weft of mysticism are inextricably intertwined. And it is just here, in fact, that Teilhard’s greatest gift to our own troubled times may lie waiting to be tapped.

Teilhard’s felt-sense conviction of the presence of Christ already at work in “the stuff of the universe”—directing the course of evolution from within its very planetary marrow—allowed him to “stay the course” over a lifetime of bearing untold personal suffering for the sake of a world that was already luminously inhabited by Christ.

For Teilhard, faith was never a matter of doctrines and principles. It is first and foremost an action—an “operative” as he calls it. Faith in this way becomes a wager: if the premise is true, you can only live into it through action. Rather than trying to do faith from the “top down,” by first convincing yourself of the logic of the argument in question, begin from the “bottom up,” by acting in alignment with it, and see what happens next!

Perhaps this is what Teilhard means by “harnessing the energy of love.” [2] In our own times, it is surely our best shot—perhaps our only shot—for acting in a way that does not merely compound the darkness. Teilhard’s conviction that faith is not something that we have but something that we do is perhaps the best antidote possible to the despair and distrust that paralyze so much of our postmodern moral resolve. It is a call to step out of the boat onto the ocean of love and discover—all our fear and skepticism to the contrary—that the water really does hold us up. 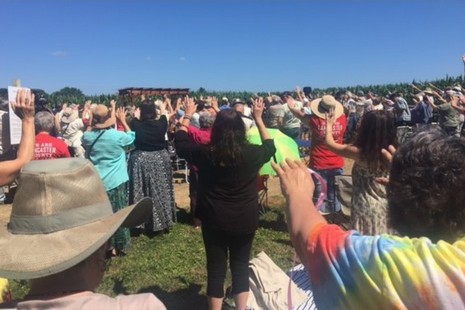 Police have arrested 23 protesters trying to stop the construction of a gas pipeline on Pennsylvania farmland owned by an order of Catholic nuns, who oppose the project on religious grounds.

The protesters were charged with “defiant trespass” when they tried to stop a backhoe beginning work on the Atlantic Sunrise gas pipeline on October 16 in West Hempfield, the Lancaster Online reported.

Lancaster Against Pipelines co-founder Mark Clatterbuck said all those arrested stood in solidarity with the nuns from the Adorers of the Blood of Christ order.

“The way the system is set up, there is not a way to legally protect our communities and our water and our land from a project like this,” said Clatterbuck. “And so it comes to civil disobedience where the community says ‘We are not going to let this happen anymore'”.

The nuns earlier allowed the protesters to build an open-air chapel in the path of the planned pipeline which gained widespread media attention in the U.S.

In late September, a U.S. federal judge dismissed a freedom-of-religion lawsuit against the company and the Federal Energy Regulatory Commission.

The nuns claimed that seizing their property to build a fossil-fuel pipeline violated their freedom of religion, which holds that land created by God is sacred and “a gift of beauty and sustenance” that should not be used in an “excessive and harmful way”.

The nuns have launched an appeal against the ruling, but the judge has allowed construction of the 67-kilometer pipeline across Lancaster County to commence.