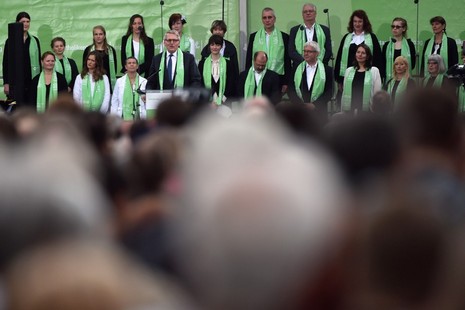 Thomas Sternberg (behind the rostrum), president of the Central Committee of German Catholics (ZdK). / Hendrik Schmidt/dpa/Maxppp

“I am a lobbyist,” Thomas Sternberg says with a smile, unafraid to use the word.   A theologian and historian by training, the 65-year-old politician has led the Central Committee of German Catholics (ZdK) since November 2015.  ZdK, which is a powerful national lay organization, made news again in May by calling on German bishops to present its request for the female diaconate to the Holy See.

“I lobby in the sense that, together with the whole Committee, I represent the interests of Catholics in our country,” explains Sternberg, an imposing figure originally from Münster.

In fact, political involvement has always formed part of the DNA of the ZdK, which was founded in 1868.  The 1848 Revolution, that “springtime of the peoples”, which took place in the context of the revolutionary anti-monarchical wave sweeping Europe ended in failure in Germany.

Lay people then joined together to defend religious freedom. The same year they launched the Katholikentag – the Catholic Days – that have now become a German institution.  “At that time, Catholics were a minority within the (German) Empire,” Sternberg notes.

As a result of many structural changes, the ZdK has now come to be recognized as having a genuinely legitimate role.  Altogether 87 of its 230 members represent diocesan councils and 97 more represent organizations such as Caritas or the Union of Catholic Women in Germany.  Another 45 people are elected by other members and often come from the political, artistic or intellectual spheres.

A former parliamentarian in the regional parliament of Land in North Rhine – Westphalia, Sternberg belongs to the same party as Chancellor Angela Merkel, the CDU.  Nevertheless, the ZdK is not a bastion of Christian Democracy since it now includes many social democrats and ecologists.

“We represent the diversity of German Catholics,” explains Sternberg, who regards involvement in political debate as the primary mission of lay people.

“Vatican II spoke of the lay apostolate,” he recalls. “It also stated that lay people must become involved in politics in the name of the Church alongside the bishops.

“Our primary mission is therefore to have an impact on society.”

The Central Committee reflects these concerns of lay people, which by their nature involve daily life and require a range of expertise in various fields.

Culture, integration, economics, education, ethics, environment are among the variety of issues tackled by the ZdK.

“Our current priorities involve working with Muslims and Europe,” Sternberg continues.  “The founding fathers of Europe were Catholic. We have a responsibility in the development of the European Union.”

During the recent general assembly in May, the ZdK also launched an appeal to respect democracy and to take up the battle against extremism.

As well as its policy and research work, the ZdK also attempts to have an influence on parliamentary debates. Sternberg is particularly proud of the role played in the prohibition of medically assisted suicide in 2015.  “We are now working for an expansion of palliative care,” he says.

Although closely linked to the German Bishops Conference, the ZdK is clearly independent and has in fact challenged the bishops. The ZdK’s work with the Church also often attracts great interest from the media.  This was the case in May when the ZdK called on the bishops to back the women’s diaconate in Rome.  Although he regards it as essential, Sternberg admits he is only “moderately optimistic” about a favorable outcome.

In addition to this work within and outside the Church and its notable ecumenical activity, the ZdK’s main task consists in organizing the biannual Catholic Days that attract tens of thousands of participants.  The next one will take place in Sternberg’s hometown, Münster.