“We are in a kind of climate emergency now,” say climate scientists, here Stefan Rahmstorf, of Germany’s Potsdam Institute for Climate Impact Research

According to satellite data, the amount of Arctic sea ice hit an all-time low for this time of year since measurements began in 1979.  To choose the most inappropriate metaphor possible, February 2016 would have been enough to bring a lot of climate watchers out in a cold sweat.  Figures from NASA using thermometers and ocean temperature readings showed February was the hottest month on record, by quite a margin.

Scientists also use satellite data to calculate air temperatures. Climate science contrarians and denialists like these readings because they have not shown as much warming as the more reliable readings on the surface, but February also set a new record for global temperatures from satellites. As Joe Romm at Climate Progress noted, “climate science deniers need a new meme”.  These heat records have been variously described as “terrifying”, “jawdropping” and “shocking”.

One climate scientist in particular, Professor Stefan Rahmstorf, appeared to capture the mood with a quote repeated in stories around the world, including here on the Guardian.  “We are in a kind of climate emergency now,” said Rahmstorf, of Germany’s Potsdam Institute for Climate Impact Research.

To climate scientists like Rahmstorf, the temperature records being broken right now are not a surprise and, at least according to Rahmstorf, they shouldn’t be seen as an entry point to some terrifying new era (at least not as terrifying as things already are).

“The media’s view is too short-term,” he told me. “As scientists we want to keep an overview of all the data and the knowledge of how the whole system works.”

What we are seeing is a continuous process of global warming that is superimposed on to the natural variability.

Just like a few cooler years were no reason to talk about a ‘slowdown’ in global warming, it would be wrong to conclude now that a few very hot years are acceleration. Global warming is proceeding pretty much exactly as predicted.

The fact that temperatures have now shot up again shows that those people who said global warming had stopped were wrong – we said all along that was nonsense.

It is becoming more and more urgent. Time has almost run out to get emissions down. That’s the real emergency.

Rahmstorf does think there is a climate emergency, but he would have made the same assessment at any point in time stretching back many years. The record-breaking February doesn’t change that. 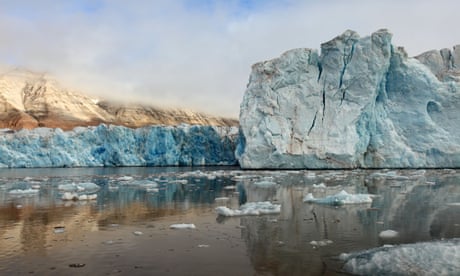 CO2 is still building up

The vast majority of the extra carbon dioxide and heat being added into the Earth’s biosphere ends up in the oceans, where heat has been building up since the early 1970s.

What the ocean doesn’t take up, is left to accumulate in the atmosphere.

Instruments at Mauna Loa in Hawaii have been showing the accumulation of CO2 since the 1950s.

Last year though saw the biggest jump ever since records started. CO2 is now above 400ppm there.

Australia holds the other long-term record of CO2 in the atmosphere – taken at the aptly-named Cape Grim, in Tasmania.

Here, the very latest readings for February 2016 show CO2 at 398.71ppm. At some point in the coming months, the Cape Grim data will also tip above 400 ppm.

If you want records, then these readings in Hawaii and Tasmania have been breaking them pretty much year on year for decades.

According to the Geological Society, there is no known precedent in the history of the Earth for the rate at which we are now liberating CO2, chiefly from burning fossil fuels.

The UN’s Intergovernmental Panel on Climate Change has also been sending out warnings since the 1990s.

Since the early 1990s, there has also been an industry driven by ideologies and fossil fuel interests to convince the public and policy-makers that there is no climate emergency, that global warming might not be happening and, if it is, that it might not be caused by humans.

Recent studies suggest that the “thinktanks” central to this effort continue to challenge the science using their suite of fake experts and cherry-picked pseudo-science. 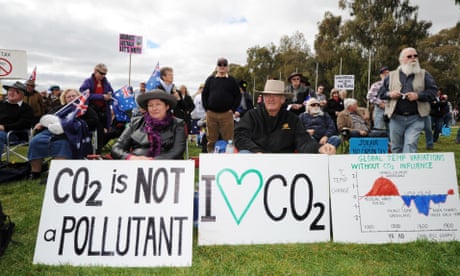 Era of climate science denial is not over, study finds

But there was another chunk of data released in Australia this week suggesting the Australian public might be getting the message that not only is it getting bloody warm out there, but that human activity is behind it.

For seven years, the polling and communications agency Essential Media Communications has been asking Australians about their views on climate change.

EMC has asked the public if they think there is “fairly conclusive evidence” that climate change is happening and – more to the point – that it is caused by humans, or if they think it’s all just a “normal fluctuation”.

This week, the level of acceptance that climate change is happening and is human caused hit an all-time high of 63% in the EMC poll.

EMC director Peter Lewis says the question of whether the public accepts the evidence that humans are the cause of climate change is “one of the most important indicators in the climate debate”.

He says a low point for this indicator was around late 2010 when Tony Abbott took over the Liberal party leadership from Malcolm Turnbull.

Tony Abbott saw climate change as an opportunity to run an agenda against action. Now we have a better quality of debate.

Lewis thinks that while climate change campaigners will be disappointed at the lack of policy change since Turnbull became prime minister, the “conditions for some sort of action are more conducive now than they were under Abbott”.

“The heat has gone out of the political debate on climate change now, as far as belief is concerned,” says Lewis.

As for the tumbling heat records, Lewis says: “For those that want action on climate change, all this heat becomes a pressure point.”