Who is killing? A climate crime scene

350.org underwater protest against Exxon and its responsibility in coral bleaching. Photograph: 350.org

Coral reefs are probably Earth’s most life-packed ecosystem; those who’ve had the privilege of diving in the tropics know the reef as an orderly riot of colour and flow, size and shape.

Which is why a white, dead reef is so shocking – as shocking in its way as a human corpse lying on the street, which still takes the form of the living breathing person it used to be, but now suddenly is stopped forever, the force that made it real suddenly and grotesquely absent.When a body falls on the street, the police come to investigate. Did this person die of natural causes, or was there foul play involved? When a reef dies, we ask the scientists. And this year they’ve told us the answer in no uncertain terms.The amazingly rapid die-off of a huge percentage of the world’s coral reefs is not a sad but normal tragedy; it’s a crime. Perhaps the fastest, most widespread crime of the global warming era. 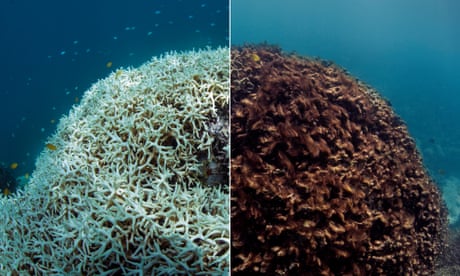 Vast swaths of coral were bleached this spring, much of the damage done in a matter of weeks as a wave of warm water swept across the Pacific and west into the Indian Ocean. The immediate culprit was clear: the ongoing rise in global ocean temperatures that comes from climate change. But that’s like saying “he was killed by a bullet”. The important question is: who fired the gun?

We know the biggest culprits now, because great detective work by investigative journalists has uncovered key facts in the past year. The world’s biggest oil company, Exxon, knew everything there was to know about climate change by the late 1970s and early 1980s. Its scientists understood how much and how fast it was going to warm, and how much damage that was going to do. And the company knew the scientists were right: that’s why they started “climate-proofing” their own installations, for instance building their drilling rigs to accommodate the sea level rise they knew was coming.What they didn’t do was tell the rest of us. Instead, they – and many other players in the fossil fuel industry – bankrolled the rise of the climate denial industry, helping fund the “thinktanks” and front groups that spent the last generation propagating the phoney idea that there was a deep debate about the reality of global warming. As a result, we’ve wasted a quarter century in a phoney argument about whether the climate was changing.

Had Exxon and its ilk merely told the truth, that argument would have been over: no one would have accused them of being “climate alarmists”. We would have gone to work to solve the problem. Our work wouldn’t be over by now, but it would be well advanced; the atmospheric level of CO2 wouldn’t have topped 400 parts per million, and the temperature rise wouldn’t be flirting with 1.5C. There would be coral bleaching, but there likely wouldn’t be a coral massacre on the scale we’ve seen this year.Which means that the victims should be angry as well as sad. The people who depend on the reefs for food, and for shelter from the waves; the economies that count on tourist dollars; the people who take spiritual sustenance from the ongoing drama beneath the waves.

The reefs can’t be made whole again: if they recover at all it will be slowly, and in the face of ongoing warming that seems unlikely. But at the very least, the nations that sustained this damage should be compensated. Exxon and its brethren made record profits in the last decades of denial and deceit; that money should rightfully go to pay for the damage it caused, and to build the energy systems that can power our lives without destruction.We need to remember that there’s nothing natural about this horror. It was caused, as so many crimes are, by greed.